The Shame of Being on the Wrong Side of History. 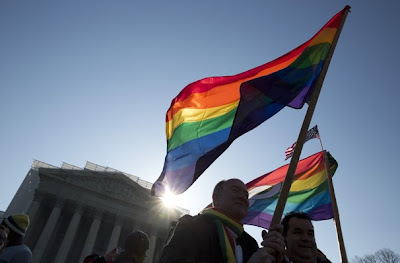 There are those who proudly fought desegregation in the last century but today, outside of white supremacist circles, history does not view them very highly.  And I suspect that some of their descendants find them somewhat of an embarrassment.  With the way support for gay equality and gay marriage is changing, many of today's loudest homophobes may find themselves similarly viewed by history and their descendants.   It may be nice to not be forgotten by history, but if one is remembered for hate and bigotry, then perhaps it would be better to be forgotten and fade away in the mist of time.  A piece I bookmarked some time ago in the Washington Post looks at the likely legacy of today's homophobes and hate merchants.  Here are some highlights:

In 1964 Barry Goldwater voted against the Civil Rights Act. He was labeled a racist and much worse for his position. Goldwater, a dedicated libertarian, voted on the constitutionality of the issue and not on the issue itself. I knew him well, and he was no racist. He had integrated the Arizona National Guard, had hired African Americans in his family company and was an early member of the NAACP.

Years later he would say publicly that he regretted his vote. As a close friend of my parents, he once told me that he ended up actually being ashamed of his vote.

Shame. That’s a strong word. But toward the end of his life (he died at 89) he had changed a lot. Goldwater was a strong pro-choice advocate — his wife was one of the original founders of Planned Parenthood in Arizona. He was also pro-gay rights long before it really became a public issue. His grandson was gay. Still, he was ashamed of that one thing in his life.

Today, there are many potential Goldwaters out there on the gay marriage issue, which has recently been argued in two cases before the Supreme Court: reviews of the Defense of Marriage Act and California’s Proposition 8, which bans same-sex marriage. There are decent people with good values who are against gay marriage. One day, in the not-so-distant future, these people will be ashamed of their position. If any of the Supreme Court justices vote against it, they will eventually be ashamed as well. Not only that but their children, their grandchildren and their heirs will be ashamed of them.

To see how quickly the public has come around on this issue is to recognize how soon it will be totally accepted in our country.

However, the people who will have the toughest time with their anti-gay positions are the religious. .  .  .  .  In their hearts, they cannot square their teachings that God made man in his own image, that we are all children of God, with the fact that they discriminate against people simply because of those they love.

I have had a few religious leaders confide in me that they were not personally against gay marriage but could not take that position publicly for fear of losing their congregations. Think of the conflict and, yes, shame they must be feeling now and how it will only worsen with time. One day, they will have to come around or they really will lose their congregations.

Suddenly a majority of senators support same-sex marriage. Sen. Rob Portman (R-Ohio) stunned his colleagues when he came out in support several weeks ago, explaining that he had a son who was gay.  .   .   .   .  Of the members who are in opposition, most are facing reelection and are afraid. In fact, it is fear and religion that keep most people from “coming out” in support. What is increasing the momentum is that so many are now in favor that the scales are tipping and that those against will appear to be “left behind,” as we say in the jargon of the apocalypse.

They should turn to their Bibles, to Ephesians 5, for guidance:  “For once you were darkness, but now in the Lord you are light. Live as children of light — for the fruit of the light is found in all that is good and right and true. Try to find out what is pleasing to the Lord.

Christ did not utter a single word against same sex love if the Gospels are to be believed.  But he did heal the Roman centurion's male lover. And he constantly condemned the hypocrisy of the Pharisees who congratulated themselves on their own piety even as the missed the message of love of one's neighbor.   The anti-gay factions are the Pharisees reincarnate and history will not view them kindly.
Posted by Michael-in-Norfolk at Tuesday, April 30, 2013