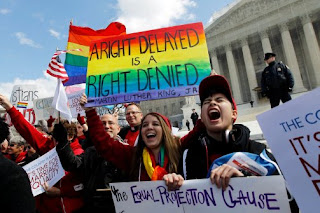 In a follow up to previous posts, I remain amazed at the Republican Party's opposition to immigration reform and in particular any reform legislation that might protect same sex couples.  Just today at my law office, I received a call fro a bi-national couple seeking advice on what to do about the visa status of the non-U.S. citizen member of the couple.  A piece in The Daily Beast looks at what appears to be the GOP's death wish/suicide pact over anti-gay bigotry.  Even here in knuckle dragging Virginia, EVERY would be Democrat candidate for statewide office supports gay marriage and LGBT employment non-discrimination protections.  Here are some highlights from the Daily Beast article:

According to The New York Times, key Senate Republicans threaten to sink the entire immigration reform initiative if it includes a provision allowing gay American citizens to bring their life partners into the country. “It’s a deal-breaker for most Republicans,” Sen. Jeff Flake (R-AZ) told the Times. In a radio interview (quoted by the Times), Sen. Marco Rubio of Florida, who is considered reform’s indispensable Republican, was blunt: “If that issue is injected into this bill, this bill will fail. It will not have the support. It will not have my support.”


Really? Republicans will deep-six the entire effort and demolish themselves with Latino voters, business interests, and young people to prevent gay people from having someone to take care of them?

Even to write those words is to wonder whether they can possibly be true. Surely Republicans know that, according to many polls, support for same-sex marriage has tipped above the majority level and is rising. Perhaps some also know that, according to a recent Huffington Post poll, partner immigration enjoys solid 7-percentage-point support. They certainly know that, from a political point of view, the perception among younger voters that a pro-Republican vote is an anti-gay vote is toxic to the GOP brand.

These days, opposition to gay equality is heavily concentrated among white evangelical Protestants, who are heavily concentrated in the Republican base. But they are increasingly isolated from the electorate as a whole. Even a solid majority of Catholics now supports gay marriage. And Republicans themselves are split down the middle on the more general question of whether “same-sex couples should have the same legal rights as heterosexual couples.”  Even among Republicans, in other words, the constituency for policies disadvantaging gay and lesbian couples is withering. And this is where Senate Republicans want to make their stand?

Back in the day, advocates of gay equality used to shake their heads ruefully over the willingness of many politicians, many Democrats as well as almost all Republicans, to throw gays under the bus for political expediency. But today’s opponents of allowing residency for gay partners fail even the expediency test. If the idea is to demonstrate that the Republican Party is hostage to a declining and increasingly isolated share of the Republican base, or to make the party seem more irrelevant and intolerant to the younger voters on whose future it depends, one could hardly imagine a better way to do it. Or a better way to improve the political prospects of liberals and Democrats.

The GOP indeed seems to have a death wish and, given the GOP's current incarnation, nothing would be better for the nation that to see the GOP die a speedy and decisive death.  Now that the GOP is basically a far right Christian sectarian party with a  strong element of white supremacy.  The GOP indeed needs to die.