Facing Down Hate and Homophobia 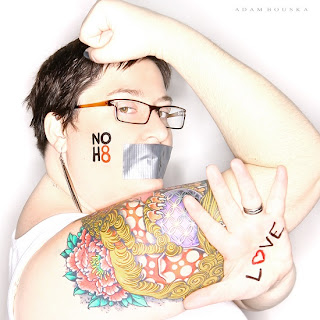 This blog has looked at writings of the blogger known as Amelia who has recounted her experiences as a mother of a young boy who seemingly is gay.  Her posts can make you laugh, cry and cheer.  She definitely calls things as she sees them and often doesn't mince her words.  Her writing style is wonderful as an added treat.  Until now, she has remained anonymous.  But now, she is "coming out" as "Amelia" - a fierce gay ally - and has been photographed by Adam Bouska of the NOH8 Campaign.  She's keeping her name confidential, but she's showing that she's a living, breathing person and a mother ready to do battle for her child.  In a post in the Huffington Post Amelia recounts her journey as a blogger and gay rights supporter and her decision to no longer remain anonymous.  We need allies like Amelia who are willing to face down haters and argue for LGBT equality.  Here are some post highlights:

When the first blog post I wrote went viral, I was shocked and overwhelmed. Being a blogger was never on my bucket list, and it was something I was completely unprepared for. I called my father to let him know what was going on. He was well aware of my son's crush on Glee's Blaine, so there was no surprise there. Instead, his reaction went like this:  "Are you anonymous?" he asked, his voice low and intent.  "Yeah, Dad, totally."  He continued in that same tone: "Good. Now I don't have to worry about you being shot."

I know that that might seem a little melodramatic, but I don't think my father's concerns were totally unfounded. In our society, being loud and proud in support of LGBT rights has, many times, led to violence. And here we were in a red state that will probably be the 40th or so to have marriage equality. Like my father, all I could think about was the safety of my kids. It made the decision easy: I started out anonymous, and I was going to stay that way.

That was over a year and a half ago, and I have learned a lot since then. Anonymity comes with a price. Although my close friends and family know I'm the blogger known as Amelia, most of the people I deal with every day don't. At first it was fine. I was so overwhelmed by the whole thing that it honestly helped to think of what was going on as though it were happening to someone else.

[W]hen I talk to my friends about things happening with Amelia, they often stop me and say, "Hon, you are Amelia." And they are right. I am the one dealing with the hard stuff, the bad stuff. I am the one who loses sleep when I am up all night responding to emails from LGBT kids. I am the one reading the hate messages. I am the one who struggles to figure out what to say next.

And as any LGBT person who has lived in the closet can tell you, being two people sucks. There is so much lying. It makes me crazy. I can't count the number of times someone has asked me why I look tired, what I did over the weekend or why I'm distracted, and the answer, the true answer, is on the tip of my tongue, and I have to swallow it back. I end up saying something like, "Things are crazy at home," or, "Things are nuts at work," when what I really want to say is, "I've been Amelia a lot lately." And the truth is that I've spent a lot of time being Amelia. Responding to the messages from LGBT kids and adults has become a huge part of my life, and a part I love. I often spend entire evenings online or on the phone with teens, LGBT adults or parents of LGBT or gender-nonconforming kids. And some of these people have become my very good friends. There are weeks when I spend more hours being Amelia than I do on the job that pays all our bills.

I get nasty comments and emails. People threaten to steal my son from me so that they can "make a man out of him." People tell me that they are waiting for the chance to "beat the fag out of him." This is my kid they are talking about, and it is my job to keep him safe. He is just a little boy. So no matter how difficult and annoying anonymity might be, I still think it is the right choice for my kid.

And here's where the difficult part comes in. I feel like complete anonymity is getting in the way of what my blog posts are all about: reaching out to people and being damn proud of my kid. But how proud can I really be if I'm speaking from behind a faceless headshot? I'm hiding behind a mask, and it feels wrong. I am so proud of my kid. I am so proud that I get to be his mom. And I am proud that I get to write about our life and share it with the readers of The Huffington Post.

So I've finally arrived at a compromise: I am going to continue being "Amelia," and the most I'll show of my kid is the back of his head. There are too many threats to my family for me to reveal everything about who I am. (The emails I get can be seriously nasty.) But I am not going to hide my face any longer. It is time for me to show some pride and give some real visibility to the woman, the mom, who is sharing our family's story. So, with the help of the fabulous guys at the NOH8 Campaign (something else I am so proud to put my face on), I have a photo to show. Here I am, tattoos and all. I am Amelia.

Kudos to you Amelia.   Being a blogger who argues for LGBT equality and acceptance does bring the hate filled e-mails and on occasion death threats (which is why for a while I stopped allowing anonymous comments).  It is ALWAYS the "godly Christian" folk who write the horrible messages, dripping with hate and threats on violence.


On the positive side, I also receive wonderful supportive e-mails and many "thank you" messages.  And like Amelia, I do speak on the phone with some readers, especially men coming out after marriage and kids who often just need a friendly listener or someone who can tell them that the CAN and WILL survive the journey no matter how arduous it may seem at times. 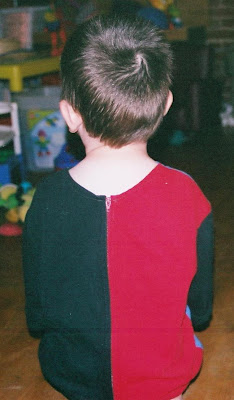