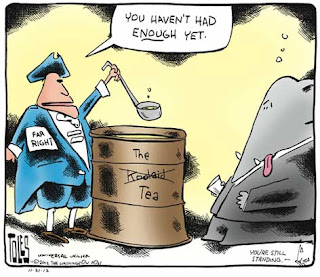 The descent of the Republican Party into a fetid swamp of insanity continues unabated despite the efforts of some to pull the party out of a long term death spiral.  A new survey reveals that 44% of Republicans (obviously the Christofascist and Tea Party elements) believe an armed revolt may be  needed to protect their "liberties."   Of course, by "liberties" they mean their ability to force their religious and social views on the rest of America.    As a former GOP activist, I am still amazed at how insane the GOP has become and again trace it to the rise of the Christofascists within the party.  When those who embrace ignorance, reject science and modern knowledge and yearn for a return of segregation and the sodomy laws gain control, insanity is what follows.  Here are highlights from The New Civil Rights Movement looks at the survey findings:

Forty-four percent of Republicans believe “an armed revolution might be necessary in order to protect our liberties,” according to a new poll just released by Fairleigh Dickinson University’s PublicMind.

Only eighteen percent of Democrats and twenty-seven percent of Independents agreed. Regardless of party, sixty percent of those with a college degree did not agree an armed revolution might be necessary.

“Nearly three-quarters (73%) of Democrats say that Congress needs to pass new laws to protect the public from gun violence, but the views of Republicans are almost completely opposite: 65 percent don’t think new laws are necessary,” the survey states.

If those “armed revolution” numbers aren’t shocking enough for you, try these.  “Turning to attitudes toward the Sandy Hook shooting in December 2012, which prompted the recent debate over the need for new gun control laws, the survey finds that overall, a quarter (25%) of Americans think that facts about the shootings at Sandy Hook elementary last year are being hidden and an additional eleven percent are unsure.”

But wait — there’s more.   “Republicans are more likely to think that the truth about Sandy Hook is being suppressed, with 32 percent agreeing,” the survey notes.