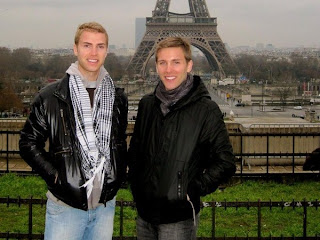 Here in Virginia same sex relationships are afforded ZERO legal recognition.  And marriages performed in gay friendly states are likewise not recognized whatsoever. Some readers may think I am exaggerating when I say that Virginia law recognizes my ownership of my dog than it does my relationship with the boyfriend, but it is the honest truth of the situation.  And it's simply not right and it surely does not reflect equality under the civil laws.  To make matters even worse, some in the Republican Party of Virginia - including GOP candidate for governor, Ken Cuccinelli - want to re-institute the state's sodomy law which has now been twice ruled unconstitutional.  To describe Virginia as a hostile environment for LGBT citizens is an understatement.


Yes, same sex couples can sign Wills, Trusts, powers of attorney and endeavor to construct for themselves some of the legal safeguards of marriage, but they are not the same and, worse yet, they can be subjected to drawn out legal challenges by hostile family members of a deceased partner - especially when there is money to be gained.  As an attorney I all too often see situations where "accepting" family members are only too willing to turn on a grieving partner and try to gain the inheritance intended for the partner.


A new film based on a true story of just what can happen was awarded a big honor at the Tribeca Film Festival  by winning the audience’s nonfiction award for a documentary film.  A piece in the Los Angeles Times looks at the film and the award.  Here are highlights followed by a movie trailer:

On the documentary side, "Bridegroom," Linda Bloodworth-Thomason’s character-driven examination of gay rights and  the same-sex marriage issue, won the audience’s nonfiction award.

“Bridgegroom,” which raised more than $300,000 of its production budget via Kickstarter, explores the real-life story of Shane Bitney Crone and Tom Bridegroom, a same-sex couple who had planned to marry in California when Bridegroom was tragically killed in a roof accident. Bitney Crone is then prohibited from attending Bridegroom’s funeral by the late man’s family. A subsequent video tribute to Bridegroom from Bitney Crone became a viral sensation. The film does not yet have distribution plans.

Hollywood Reporter says this about the movie and it's true life story line:

It’s guaranteed that there won’t be a dry eye in any theater showing Linda Bloodworth Thomason’s deeply moving documentary about the plight of Shane Bitney Crone, who lost his lover in a tragic accident and was prevented by the deceased’s family from even attending the funeral. The film - -inspired by a 2012 YouTube video posted by Crone that went viral -- showcases the personal side of the story while also putting a spotlight on the hot-button issue of gay marriage. Screened at the Tribeca Film Festival, where it was introduced by no less a personage than President Clinton, Bridegroom is destined for a long life on the festival circuit and beyond.

It’s Tom’s accidental death from a fall off a rooftop that fuels the film’s principal dramatic element, as Shane is prevented from seeing his dying lover in the hospital, only finally gaining entry thanks to the kindness of his nurses. Despite his previously warm relationship with Tom’s religious mother, he finds himself completely ostracized by the family, his presence in Tom’s life virtually erased.

The story is told in compelling sympathetic fashion by Designing Woman creator Thomason, with extensive comments by various friends and relatives of the couple as well as Shane himself, who movingly and articulately expresses his profound grief. Such moments as when he describes making his final farewell to his dead lover via the secret code of tapping that they used to express their love in public are simply shattering.

What's even more disturbing is knowing that stories like this happen simply so that the "godly Christian" set can feel good about themselves for punishing and stigmatizing "sinners" like us gays.   It is they, not us who commit the greater sin.  They are self-centered, hate filled people who deserve no deference and certainly no respect.