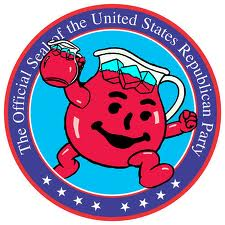 The Republican Party of William F. Buckley, Jr., and Dwight Eisenhower is beyond dead.  It's as if that incarnation of the GOP never existed when one contemplates the utter lunacy and craziness that now passes as party discourse and policy.   And as I have said before, in my view much of the insanity started when the Christofascists were made welcome by the so-called party establishment some 30 plus years ago.  When you allow in folks whose entire world view is out of touch with objective reality and who reject logic and modern knowledge, craziness is the likely result.  And along with the craziness has come increased racism and bigotry.  A piece in The Daily Beast looks at the insanity that is now the norm in today's GOP.  Here are excerpts:

A few days after the Boston bombings, Stella Tremblay went to Glenn Beck’s Facebook page to express her conviction that the terror attack was, in fact, orchestrated by the U.S. government. “The Boston Marathon was a Black Ops ‘terrorist’ attack,” she wrote. “One suspect killed, the other one will be too before they even have a chance to speak. Drones and now ‘terrorist’ attacks by our own Government. Sad day, but a ‘wake up’ to all of us.”


Tremblay’s post, though, stood out from the wave of post-attack crazy because of her day job: she is a New Hampshire state legislator.  Like too many enthusiastic dupes, the Republican representative was echoing conspiracy entrepreneurs like Beck and InfoWars’ Alex Jones, who blend dark alternate history with a dystopian future, offering the listeners the “secret truth.”

Tremblay is part of a disturbing trend of – conservative state legislators and even congressmen entertaining conspiracy theories that are creepy and unseemly coming from average citizen, but a sign of civic rot when they start getting parroted by elected officials.

This week in Missouri, state legislators voted to cut funding for the state’s divers license bureau because it had been tasked in 2003 with also overseeing concealed-carry permits. The wife of state Rep. Kenneth Wilson explained – in the words of the Columbia Tribune – that the bureau “was part of a plot to impose United Nations policies in this country.


Adding to the reality-free high pitch of anxiety was the Texas state attorney general who – during the height of the North Korean escalation earlier this month – declared that the real danger to America wasn’t a communist dictatorship threatening to attacks us with nuclear weapons, but the Obama administration.

“One thing that requires ongoing vigilance is the reality that the state of Texas is coming under a new  assault,” A.G. Greg Abbott said, according to the Waco Tribune, “an assault far more dangerous than what the leader of North Korea threatened when he said he was going to add Austin, Texas, as one of the recipients of his nuclear weapons. The threat that we're getting is the threat from the Obama administration and his political machine." This is the leading elected law enforcement official in our second-largest state.

In North Carolina, conservative state law-makers decided to push forward a clearly unconstitutional bill to allow the state "to declare an official religion, in violation of the Establishment Clause of the U.S. Bill of Rights, and seeks to nullify any federal ruling against Christian prayer by public bodies statewide,”

This sickness is starting to infect the halls of Congress. Friday, Congressman Louie Gohmert couldn't resist telling WND radio that, "This administration has so many Muslim brotherhood members that have influence that they just are making wrong decisions for America."

The embarrassing incidents are evidence of a larger problem that needs to be confronted: when you do not condemn the use of hate and fear to serve as a recruiting tool against your political opponents, the ability to reason together is undermined and self-government is compromised. There is a cost to condoning extremism when it seems to benefit “your team.”

There are some who complain that I beat up on the GOP too frequently.  Not surprisingly, some such critics live safely in liberal states where they do not daily have to deal with the GOP craziness so rife here in Virginia - craziness perhaps best exemplified by Ken Cuccinelli.  But the truth is that too many voters who do not pay attention except during the last few weeks before elections still have not grasped the fact that the GOP is no longer the party that it once was and that voting Republican out of habit is enabling the craziness to grow and worsen.