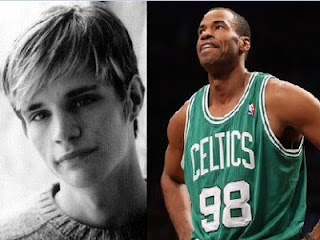 One surprise that came out during NBA star Jason Collins' coming out is that he chose his jersey number to honor Matthew Shepard who was murdered in 1998.  Even Shepard's parents were surprised to learn of the tribute to their son.  Huffington Post covers this disclosure.  Here are excerpts:

In his Sports Illustrated editorial, the 34-year-old Collins reveals he wore the number 98 in 38 games this season while playing for the Boston Celtics and Washington Wizards as a silent tribute to Matthew Shepard, the 21-year-old gay college student who was beaten and left to die outside Laramie, Wyo. in October 1998.


"My one small gesture of solidarity was to wear jersey number 98 with the Celtics and then the Wizards. The number has great significance to the gay community. One of the most notorious antigay hate crimes occurred in 1998. Matthew Shepard, a University of Wyoming student, was kidnapped, tortured and lashed to a prairie fence. He died five days after he was finally found.

That same year the Trevor Project was founded. This amazing organization provides crisis intervention and suicide prevention to kids struggling with their sexual identity. Trust me, I know that struggle. I've struggled with some insane logic. When I put on my jersey I was making a statement to myself, my family and my friends."

You can read Collins' full editorial here.  Matthew's parents, Dennis and Judy Shepard, told Fox Sports they were honored by the tribute.

Meanwhile, the Christofascists are grumbling and having a cow over the positive reception that Collins has received to date.  AFA's hate merchant in chief, Bryan Fischer was his usual vicious self:

"Everybody is talking about how brave and courageous Jason Collins is and I'm going to submit to you that he's not being brave and courageous at all," Fischer declared. "This is just a shrewd marketing move to wave the rainbow flag right at the time when it can be of the most benefit to him. A year from now, when he's been out of the NBA for a year, nobody is going to care.  This is the only time this would be of any benefit to him ... This is why this is not courageous; he's become a hero to the deviancy cabal and their allies in the political world and academia and the media, like President Obama"