The Loss Of Government Jobs Is Holding Back The Economy 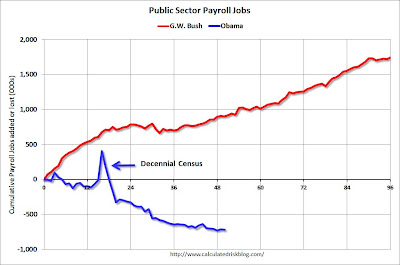 The latest jobs report was welcomed news with unemployment down to 7.5% and 165,000 new jobs.  In addition, the lack luster figures for the two prior months were sharply adjusted upward.  But despite this good news, continued cuts in government employment is undermining the private sector gains.  Also creating further drag on the economy are sequester cuts which in this area are hitting families with 20% pay cuts even as their built in expenses are at their old levels.  We have personal friends suffering this experience right now.  The ultimate irony from it all is that GOP demagogues accuse Obama of being a big spender while it was their moron president George Bush who blew the nation's budget.  A piece in Think Progress looks what the loss of government jobs is doing to the over all economy.  Here are article highlights:

The jobs report out this morning was full of good news: unemployment fell to 7.5 percent as the economy added 165,000 jobs, while big upward revisions to the past two months’ jobs numbers were added. The private sector carried those figures, adding 176,000 jobs in April. Yet the number was dragged down by the loss of 11,000 public sector jobs.

This has been a steadily recurring trend with each monthly jobs report: even when the private sector adds a solid number of jobs, the overall figure is pulled down by losses in the public sector. 741,000 jobs have been lost in the government sector since the beginning of the recovery period in June 2009, with 89,000 gone since this time last year.

Overall, the government has shed 718,000 net jobs since President Obama took office. While often accused of bloating the government, the trends show exactly the opposite: Obama has overseen a sharp decline in public sector payrolls as compared to his predecessor President George W. Bush, as can be seen in this chart [see chart above] from Calculated Risk.

While government workers have been maligned as lazy paper pushers, many of them perform vital work that benefits their communities. Take, for example, the loss in teaching jobs. “Local government education” jobs, or in other words teachers, dropped by 1,500 last month and have declined by 355,500 since the recovery began.

The drop in public spending and, in turn, public employment has had big consequences for the recovery. If public sector rolls hadn’t been shrinking so steadily, the unemployment rate would likely be a full percentage point lower. The furloughs and potential job losses from sequestration cuts don’t even show up in these numbers. When the full pain of those cuts is felt later in the year, the trend may look even worse.


The Republicans keep touting austerity but somehow never seem to understand - perhaps they simply don't care - that real lives and real American families are being harmed. Meanwhile, of course, the rich are getting richer.