The Trouble With Ted Cruz 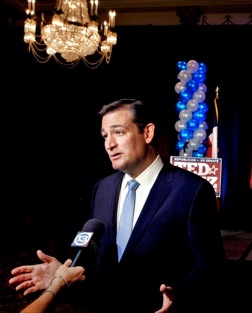 In my view, Senator Ted Cruz of Texas personifies much of what wrong with today's Republican Party.  Like Ken "Kookinelli" Cuccinelli here in Virginia, Cruz isn't stupid.  Rather he's just plain crazy - and arrogant and abrasive as well while he spouts his batshitery.  Also, like Cuccinelli, he seems to be having a mad passionate love affair with himself.  It's all about him.  Of course, the fact that he bears an frightening resemblance to the infamous Joe McCarthy doesn't help matters either.  While the most insane elements of the far right love him, Cruz seems to rub even some of the Kool-Aid crowd the wrong way.  Perhaps they haven't drunk enough Kool-Aid.  David Frum take Cruz apart in a column in The Daily Beast.  Here are highlights:


Ted Cruz is brilliantly positioning himself to run in 2016 as the true leader of the party's conservative wing: a Spanish-surnamed Princeton grad and Harvard lawyer who checks all the ideological boxes, who stood apart from the Gang of Eight immigration deal and by the general weirdness of the Paul family's conspiracy-mongering.

Yet … there is something about him that even the hardest-liners just cannot accept. First Jennifer Rubin in the Washington Post and now today Kimberley Strassel in the Wall Street Journal have each thrown their full weight at the Texas senator.

[D]isagree with Mr. Cruz on his filibuster strategy, and you are a "squish." Take a different line from the Club for Growth on pre-existing conditions (or any of its poorly vetted Senate candidates), and you are "the establishment." Think slightly different than Jim DeMint—now at Heritage, serving as maestro of the rebel orchestra—and you are not "conservative." These terms are used with great calculation. Take our orders, or we will brand you a RINO in a primary.

These days, the squishes apparently include groups like Americans for Tax Reform and FreedomWorks, which supported the pre-existing conditions bill. They include rock-ribbed conservatives like Oklahoma Sen. Tom Coburn, who did not join the gun filibuster threat—issued before the bill was written. "I've done more filibusters than Rand Paul is old," said Mr. Coburn at the time—adding that his rule is to first read what he's filibustering.

Yet seriously there cannot be any doubt about Ted Cruz's "smarts." He's just smart for different ends - his own ends. It's this that rubs so many conservatives the wrong way, and that may yet prove Cruz's undoing. A little while ago I asked a Texas conservative I know to unpack the antipathy aroused by Cruz. He recently returned from a Cruz fundraiser to fire off the below e-mail:

Ted Cruz was just a lawyer until 20 minutes ago, and a nerdy one at that. He was a high school debater, and essentially still is. He has no military, business, or government experience. And now he's being feted as Cicero even though his speeches are mostly banal broadsides against Barry, Janet Napolitano, and Big Government. He has no legislative accomplishments, but "bold leadership" now is bragging to your friends that you called all of your Senate GOP colleagues "squishes" to their faces. He made an ass out of himself by trying to cross-examine Diane Feinstein, trying to trap her into saying that the Bill of Rights only applies to some people, but she ate his lunch. Still, he's Cicero.

But more than anything, he's of the Jim DeMint/Mark Sanford mold of "movement conservatives" strangely uninterested in actually legislating. They like to think that they're speaking truth to power in government, when in reality they are just pundits who rail against the feds while they and their staffs are receiving nice government paychecks. Say what you will about Rush Limbaugh, but he pays his own bills.

Perhaps there is hope for Texas yet.  I don't like Cruz.  Like Cuccinelli, he's dangerous and needs to be beat down and discredited.   The sooner the better.