Is Iraq Descending into Chaos - Did Bush/Cheney Make Us Less Safe? 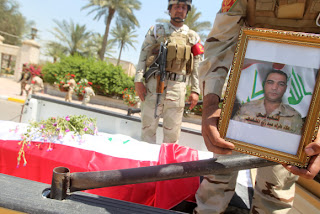 I have never supported the war in Iraq and I can still see my former living room where I watched the televised address of George W. Bush announcing that he had sent America to war.  We now know that his entire premise for the war was based on deliberate lies - lies which a lazy media never bothered to expose.  As of the lies of Bush and Dick Cheney, thousands of American died needlessly, billions of dollars better spent on America's infrastructure were squandered, and hundreds of thousands of innocent Iraqis died.   Increasingly, it is becoming clear that the war was ultimately all for nothing.  Current circumstances in Iraq show a county spiraling towards chaos and an internal religious war that must have extremists in Iran salivating.  And Bush and Cheney set it all in motion.  And committed war crimes along the way.   Yet many American still can't understand why some Muslims came to hate America even if they had not done so before.   American actions have been the best terrorist recruiting program Islamic extremists could have asked for.  A piece in Foreign Policy Magazine looks at what Bush/Cheney and American hubris has likely wrought.  Here are excerpts:


Iraq is spiraling out of control. Following the arrests in December of the bodyguards of Finance Minister Rafi Issawi, Sunnis took to the streets, revealing their widespread sense of alienation in the new Iraq and demanding the end of what they consider a government policy to marginalize them. As with other protests in the Arab world, they were initially driven by legitimate grievances. But against the backdrop of provincial elections, little was done to address the concerns of the protesters -- despite calls to do so from the top Shia cleric, Ayatollah Sistani. Politicians instead exploited the demonstrations for electoral gains. President Maliki took the opportunity to distract attention away from the lack of services and rampant corruption, presenting himself as the defender of the Shia, in the face of Sunni regional powers intent on overthrowing Shia regimes -- Syria first, then Iraq. Sunni politicians, for their part, sought to benefit from the demonstrations to rail against government oppression to gain support for their own electoral campaigns.

Last week, the Iraqi Army entered Hawija, near Kirkuk, to arrest people accused of attacking Iraqi Security Forces. In the ensuing violence, 200 people were killed. There are reports of desertions from the Iraqi Army. Kurds have moved peshmerga into positions in the disputed territories. Tribes are forming militias to protect themselves from the Iraqi Army. Five Iraqi soldiers were killed in Anbar -- and the province has been put under curfew. Ten satellite channels, including al-Jazeera, have been banned, accused of spreading sectarianism. Bombs exploded in Shia towns. The speaker of parliament called for the government to resign and for early elections.

By seeking to eliminate his Sunni rivals, Maliki has removed the wedge that the U.S. military drove between Sunni extremists and the Sunni mainstream during the Surge, at such great cost. There is a growing sense that the conflicts in Syria and Iraq are merging into one, with Shia regimes, backed by Iran, battling against Sunnis, including al Qaeda elements. We may be witnessing the breakdown of the post-WW I settlement and the nation-states established under the Sykes-Picot agreement.

Will our legacy from the Iraq war be a regional power struggle ignited by the resurgence of Iran, the contagion of sectarianism into Syria, the horrific violence of jihadist groups? Is this in our national interest? Can we not do more to make Iraq a more positive influence in its neighborhood?

There were those who saw the likelihood of this disaster even before the fools and power made in the Bush/Cheney regime took America to war on a campaign of lies.  Sadly, their voices were drowned out by jingoism and the willingness of too many Americans to fall into the dangerous "America, love it or live it" mindset which always seems to bring disaster.  Remember Vietnam?  America learned nothing.  I continue to believe that sometimes the most patriotic thing one can do is challenge the conventional thinking, especially if it is sourced in ultra conservative factions.  Time and time again, America has been the loser when patriotic critics of adventurism in foreign policy over rides logic, reason and hard objective facts.  For what they did, I remained convinced that Bush and Cheney are war criminals who deserve to be tried and severely punished.