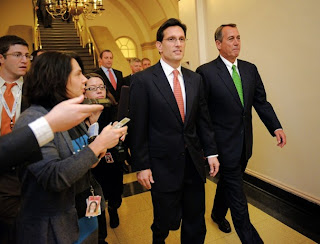 Somewhat surprisingly, the GOP controlled House of Representatives passed the Senate fiscal cliff bill that cleared the Senate in the wee hours of New Year's Day morning.  At the last minute, the whining of the Tea Party crowd was ignored and the fear of inaction and its consequences - both economically and politically pushed Republican members of the House to vote for passage.  Disingenuously, some of them are grousing that the bill was too hastily drafted and did not do much of what needed to be done.  Never mind their own roll in obstructionism and a refusal to negotiate for a compromise in good faith.   Here are highlights from the Washington Post:

To a tea-party-influenced crop of House Republicans, the bill to resolve the “fiscal cliff” crisis was everything they had wanted to change about the way Washington worked. Too rushed. Too bloated. Too secretive. Too expensive.

“There’s lots and lots of pork in this bill,” said Rep. Darrell Issa (R-Calif.), one of its most outspoken opponents.

On Tuesday, however, it passed on their watch. After the Senate approved the compromise, it briefly appeared that the GOP-led House would rebel against the bill. But the threat faded: For many Republicans, it appeared, the risk of rejecting the bill — and courting economic calamity — outweighed their unhappiness with the bill’s contents.

Although it will raise some taxes, it also will extend the vast majority of the George W. Bush-era tax cuts, as well as loopholes for many businesses. In all, the bill will cause deficits to rise by nearly $4 trillion over the next decade, according to the nonpartisan Congressional Budget Office. But that estimated increase is based on the massive tax hikes and spending cuts scheduled to take effect without a resolution to the fiscal cliff.

On Tuesday, with only a few hours to look at the Senate bill, House legislators complained that they had not begun to understand what McConnell and Biden had concocted.

“It’s the only responsible way to proceed: to make sure we see and understand what’s in the bill and what we’re voting on,” said Rep. Lou Barletta (R-Pa.). “I think most of the American people would expect that. It’s how business should be done here in Washington, instead of being forced into a vote and finding out what’s in it later on.”

But in the end, Barletta voted for the bill. He had heard that Senate leaders were saying they wouldn’t vote on an amended House bill. The Senate had left the House with little choice: Accept this path to avert the cliff, or there would be no other.

With future debt ceiling talks coming in the future, one would hope that the Congressional GOP would begin to act in good faith.  Sadly, that is likely too much to hope for - especially if weasel like Eric Cantor tries to  over throw John Boehner as Speaker of the House.


Posted by Michael-in-Norfolk at Wednesday, January 02, 2013