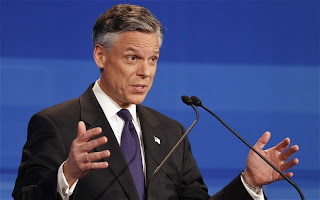 It is interesting to see a conservative like Jon Huntsman repeatedly slam the lunacy of today's GOP.  I personally believe that had Huntsman been the GOP nominee instead of Romney, the election results might have differed..Huntsman is correct that the party has become too extreme and unwilling to accept objective reality not to mention simple math.  The problem is now that the GOP base has become so insane that the GOP nomination process makes it nearly impossible for a non-extremist - or someone unwilling to prostitute them-self to the extremists - to secure the nomination. It is also noteworthy that Huntsman indicated that states should be allowed to enact gay marriage laws - something anathema to the GOP's Christofascist elements.  Here are excerpts from an article in the Daily Telegraph:

In an interview with the Daily Telegraph, the former Utah governor and leading Republican moderate said the party must accept "a strong dose of libertarianism" on social issues and allow state governments to move ahead with gay marriage.

Offering his prescription for the party's renewal, Mr Huntsman said the early stages of the Republican presidential primaries rewarded extreme conservatives rather than "long-term competitive candidates" who could effectively take on the Democrats.

he scale of Mitt Romney's defeat in November has left the party reeling and may create a fresh opening for the socially-moderate but fiscally-conservative ideas Mr Huntsman espoused in the primary.
"The party right now is a holding company that's devoid of a soul and it will be filled up with ideas over time and leaders will take their proper place," he said.

Mr Huntsman urged the party to "reflect a little bit on our winning chapters" and face up to a demographic reality where white conservatives represent a shrinking portion of the electorate. "We can't be known as a party that's fear-based and doesn't believe in math," he said. "In the end it will come down to a party that believes in opportunity for all our people, economic competitiveness and a strong dose of libertarianism."

He said he "absolutely" supported individual states being allowed to implement gay marriage, saying that Abraham Lincoln, the first Republican president, believed that "equality under the law is an American value".

Mr Huntsman cautioned that the improving economy would put Mr Obama's Democratic successor in a strong position for 2016 but said that eight years of incumbency would take a toll on the President's party.