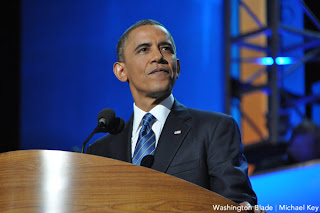 With Illinois joining the states that will be taking up marriage equality in that state's upcoming coming legislative session, Barack Obama has climbed off the face and is advocating for passage of marriage equality.  One can already hear the sputtering and envision the spittle flying around the Christofascists who are increasingly seeing a rejection of their effort to force their foul, fear and hate filled religious beliefs.  Truth be told, America will not reach its constitutional promises of equality and religious freedom until the power and special privileges of the Christian Right are destroyed.  Rather than foster love and equality, the main stock in trade of these Christofascists is hatred and division and an increasingly shrill effort to retain white conservative Christian privilege.  The Washington Blade looks at Obama's endorsement of marriage equality in Illinois.  Here are excerpts:

The White House announced on Saturday in a Chicago newspaper that President Obama supports the legalization of same-sex marriage in the state where he once served as both a state legislator and a U.S. senator.

Shin Inouye, a White House spokesperson, was quoted in an Chicago Sun-Times article as saying President Obama would vote in favor of marriage equality in Illinois and that position is consistent with his earlier stated belief that same-sex couples should be able to marry. The Washington Blade independently confirmed Obama’s support for the measure.

“While the president does not weigh in on every measure being considered by state legislatures, he believes in treating everyone fairly and equally, with dignity and respect,” Inouye said.

“As he has said, his personal view is that it’s wrong to prevent couples who are in loving, committed relationships, and want to marry, from doing so,” Inouye said. “Were the President still in the Illinois State Legislature, he would support this measure that would treat all Illinois couples equally.”

Bills to legalize marriage equality were introduced in the Illinois House and Senate in February almost a year ago. Sen. Heather Steans (D-Chicago) and out State Rep. Greg Harris (D-Chicago) are the chief sponsors of the legislation.  Bolstered by the wins for marriage equality at the ballot on Election Day, supporters of the legislation in Illinois have indicated they’ll push for passage of the bills before the current legislative session ends on Jan. 8. Gov. Pat Quinn (D) has already announced his support for marriage equality.