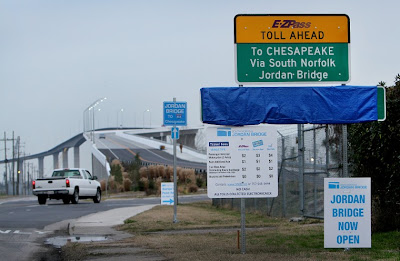 Rather than raise the state gasoline tax which has not seen an increase in 25 years or raise the state sales tax to pay for Virginia's increasing crisis transportation funding, the Virginia Republican Party's solution has been to slap tolls on road projects build either completely by private money or in what are euphemistically called public-private partnerships.  In these later scenarios, there is no partnership and the real intended relationship is that the public gets screwed and the private interests get rich. As with all of their funding approaches, the Virginia GOP tells the gullible public that they did not raise taxes - the public just ends up paying in some other way be it "user fees," increased license fees or, in the case of the new Jordan Bridge which spans the southern branch of the Elizabeth River by allowing a private interest to reach into the tax payers' pockets.  I'm sorry, but maintaining a first class transportation system is the state's responsibility - especially if Virginia's economy is to be protected from strangulation due to transportation gridlock.  Also distressing is that Hampton Roads has been disproportionately targeted for financial rape by public- private road projects.

Interestingly, an article in the Virginian Pilot shows the other fallacy of the Virginia GOP's approach: people will change their travel habits to avoid tolls.  So far the new bridge has seen traffic levels drop by 90%.  Here are article highlights:

The new South Norfolk Jordan Bridge is a nice place for a stroll. The span's snaking white walkway provides unparalleled views of surrounding cities as it climbs 145 feet over the Elizabeth River's Southern Branch.

And for deep thinkers, the path provides plenty of silence, even during rush hour.
After opening in late October, the privately owned bridge drew 35,271 E-ZPass customers from Nov. 1 to Dec. 21, according to data provided by the Virginia Department of Transportation. That equates to fewer than 700 a day or, assuming no traffic on weekends or Thanksgiving, about 980 per weekday.  The old Jordan Bridge averaged about 7,000 vehicles per weekday before it was closed in 2008 for safety reasons.

Kevin Crum, the new bridge's general manager, sent a statement by email that said the crossing "averages 2,500-3,500 vehicles per day (depending on the day)" and that the owners "are pleased with where we are."  The bridge cost $142 million to build and was financed entirely by private investors.

Jason Ewell, the owner of SoNo Auto Sales, said he suspects the $2 toll, combined with the E-ZPass membership, has kept drivers from trying the bridge.  "Before, if you had 75 cents laying in the ashtray, you could go across it," he said.

Ewell said he expected the bridge to continue to draw more traffic as people become more familiar with it. The beginning of $1.84 rush-hour tolls at the Downtown and Midtown tunnels in early 2014 also could persuade more people to take the Jordan.

And what happens if the traffic never comes? The city is protected in a development agreement by a clause that says it can begin the process to take ownership of the bridge if it is ever closed for more than three months, for reasons other than acts of God, labor strikes, war or scheduled improvements.

When the tolls hit the Midtown Tunnel next yea (to enrich private interests, of course), I have already decided that I will adjust my commuting schedule and my use of the Midtown will become a thing of the past - at least until VDOT  and the Virginia GOP empower some private interest to butt rape commuters on the commuters on the Hampton Roads Bridge Tunnel as well or I decide to relocate the law firm to Hampton.  As at the national level, the Republican Party in Virginia is proving that it is unfit to govern and that average citizens and the needs of the public are the last on their priority list.  One can expect regionalism between the Peninsula and south side to take a huge step backwards as the populace is strangled with tolls - all because the Virginia GOP and Bob "Taliban Bob" McDonnell are afraid to stand up to the lunatic elements of their party base.
Posted by Michael-in-Norfolk at Saturday, January 05, 2013