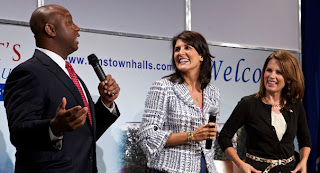 As the 113th Congress was sown in, all signs are that the Republican Party is convinced that better "messaging" and a few token non-white faces among the Congressional GOP will be enough to attract the votes of the very minorities that GOP policies and talking points either out right demonize or seek to disenfranchise.   A GOP authored op-ed in the Washington Post bloviates on these very points.  Meanwhile, a piece in  Politico looks at the reality of the political field as opposed to the GOP fantasy land still inhabited by many GOP members of the House of Representatives not to mention the objective reality untethered GOP base.  Here are highlights from the Politico article:


The flawed hypothesis that Rep. Tim Scott’s appointment as a new senator from South Carolina will serve to attract African Americans to the GOP is certainly more hype than whole.

Many African Americans are confounded by the consistently popular but baseless assumption that a candidate’s skin color is the determining factor in our political consideration. However, it is important for Republicans to understand their appeal to African Americans is not contingent on supporting African Americans for public office. To be sure, there is value in such racial inclusion. But the value lies not only in the outreach — endorsing black Republican candidates, or buying political commercials on black media outlets — but the efforts to reach beyond antiquated campaign tactics to the black community that matter more in determining our political affinities.


It would be an exorbitant, mindless expectation to think the GOP will hold its own without alterations and transformations. Only policy and ideological modification will bring black Americans to take their first serious look at the GOP since FDR captured their political loyalty in the 1940s.

It is in the long-term political interest of African Americans that the Republican Party becomes a viable alternative.  .  .  .  .  However, this interest does not trump the promotion of inclusionary social policies that respect the diversity of our country. With more inclusionary policies and unrestricted access to leadership, the GOP may see increased loyalty from African Americans and from other minority communities.

Some black Americans embrace conservative principles, as Scott does. However, they remain a small minority. Contrary to what many Republicans seem to believe, black voters could support the party with the thickest commitment to racial amity and the willingness to reduce racial friction to a fraction as they do with the Democratic party.


Despite the token appointment of Scott to the Senate, it would be foolish to expect the GOP to change substantively.  Too much of the GOP base is comprised of angry white Christianists who view blacks with only slightly less hate than they hold for LGBT Americans.