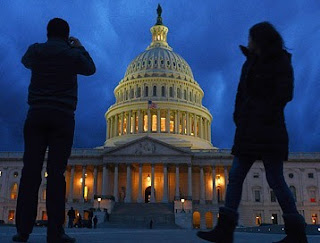 In the early hours of this morning the Senate voted 89 to 8 for passage of a fiscal cliff deal.  The measure now goes to the the House of Representatives and must face utterly dysfunctional, misogynistic House Republicans - a group that continues to forget that their majority is due solely to gerrymandering and the Democratic candidates received one million more votes overall.  One can only hope that the House Republicans will for a change put the best interests of the country ahead of prostituting themselves to the foul elements of the GOP base.  It will be important to emphasize that it will be Republicans who will be raising taxes on all Americans if the legislation is not enacted.  Here are highlights from a Washington Post on the details of the legislation:

The Senate approved a bipartisan agreement early Tuesday morning to let income taxes rise sharply for the first time in two decades, fulfilling President Obama’s promise to raise taxes on the rich and avoiding the worst effects of the “fiscal cliff.” The agreement, brokered by Vice President Biden and Senate Minority Leader Mitch McConnell (R-Ky.), passed 89 to 8 in a highly unusual New Year’s morning vote. It now heads to the House, where leaders have not guaranteed passage but top officials believe it could win passage in the next few days.

The agreement primarily targets taxpayers who earn more than $450,000 per year, raising their rates for wages and investment profits. At the same time, the deal would protect more than 100 million households earning less than $250,000 a year from income tax increases scheduled to take effect Jan. 1.

Republicans gave in on the spending cuts, known as sequestration, by agreeing to a two-month delay in budget reductions that would be paid for in part with new tax revenue, a condition they had resisted. And the White House made a major concession on the estate tax, agreeing to terms that would permit estates worth as much as $15 million to escape taxation by the end of the decade, Democrats said.

Senior aides predicted the measure would pass the House with bipartisan support. But Boehner’s decision to delay the vote meant the nation would tumble over the cliff at least briefly.  In addition to dealing with the fiscal crisis, the measure would extend federal farm policies through September, averting an estimated doubling of milk prices. The deal also nixed a set pay raise for members of Congress.

Nor would taxpayers earning less than $450,000 entirely escape. The deal would restore limits on personal exemptions and itemized deductions that existed during the Clinton administration, with those benefits phasing out for couples earning more than $250,000 a year and single people earning more than $200,000.

The last last piece of the puzzle to fall into place was the sequester, which would be delayed until early March under an agreement to raise $12 billion in new tax revenue and $12 billion in fresh savings from the Pentagon and domestic programs.


A convenient summary of the measure is also provided by Ezra Klein here.  Is the deal a good one?  No, it could have been better, but the alternative of possible financial markets chaos and hits to the economy would have been worse.  Of course, the deal still must pass the objective reality untethered House GOP.