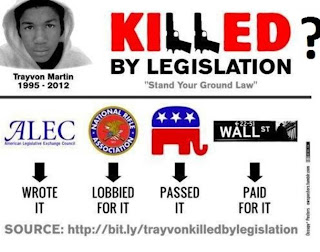 In many ways the National Rifle Association ("NRA") seems determined to bring back the gun slinging days of the Old West.  We hear from the NRA and its political whores ad nausea that law abiding citizens should have the right to be armed for self protection - including with assault weapons.  Yet a new study at Texas A&M University suggests that rather increasing safety and reducing homicide rates increased gun ownership and so-called "stand your ground" laws that have increased the sphere where lethal force is permissible have increased homicide rates, not lowered them.  An NPR story looks at the findings of the study and the reality that the actions of the NRA and its adherents are making us all less safe.  In reading the article and this post, as previously stated on this blog here, the real financial backers of the NRA are gun manufacturers who are always seeking to increase gun sales, not your neighbor who may go hunting from time to time or who may have a basic hand gun.  Here are some highlights:

If a stranger attacks you inside your own home, the law has always permitted you to defend yourself. On the other hand, if an altercation breaks out in public, the law requires you to try to retreat. At least, that's what it used to do.

In 2005, Florida became the first of nearly two-dozen states to pass a "stand your ground" law that removed the requirement to retreat. If you felt at risk of harm in a park or on the street, you could use lethal force to defend yourself. The shooting of unarmed 17-year-old Trayvon Martin in Sanford, Fla., drew national attention to these laws.

Now, researchers who've studied the effect of the laws have found that states with a stand your ground law have more homicides than states without such laws.

Now, researchers who've studied the effect of the laws have found that states with a stand your ground law have more homicides than states without such laws.

Hoekstra obtained this result by comparing the homicide rate in states before and after they passed the laws. He also compared states with the laws to states without the laws.

As to whether the laws reduce crime — by creating a deterrence for criminals — he says, "we find no evidence of any deterrence effect over that same time period."

[B]ased on the available data, it appears that crafters of these laws sought to give good guys more latitude to defend themselves against bad guys. But what Hoekstra's data suggest is that in real-life conflicts, both sides think of the other guy as the bad guy. Both believe the law gives them the right to shoot.

In a separate analysis of death certificates before and after stand your ground laws were passed in different states, economists at Georgia State University also found that states that passed the laws ended up with a higher homicide rate.

That study also tracked the increased homicides by race. In contrast to the narrative established by the Trayvon Martin shooting — many people believe black men are more likely to be the victims of stand your ground laws — this analysis found the additional deaths caused by the laws were largely concentrated among white men.

Stanford law professor John Donohue, on the other hand, praised the study done by Texas A&M's Hoekstra. Donohue has been studying crime and violence for more than two decades and is working on his own independent analysis of stand your ground laws. So far, he says, he's getting the same results Hoekstra did.


In short, what the researchers are seeing is more death and mayhem compliments of the NRA and the gun manufacturers who fund it.