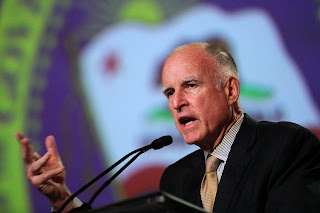 This blog frequently looks at the lies and harm done by Christofascist backed "ex-gay" ministries and reparative therapy - a voodoo form of therapy condemned by every legitimate medical and mental health association in the country.  Seeking to end what is little more than child abuse, the state of California enacted legislation that banned therapist from subjecting minors to such therapy.  As was to be expected, Christianists desperate to make a quick buck and to keep alive the myth that sexual orientation is changeable, filed suit and an appeal is now before the 9th Circuit Court of Appeals which granted a stay of the law's effectiveness pending a full hearing of the case.  As the Los Angeles Times is reporting, California Governor Jerry Brown has appealed the stay.  Here are story excerpts:

Gov. Jerry Brown on Wednesday appealed a court injunction that has blocked enforcement of a new law that prohibits providing gay minors with therapy aimed at converting them to being heterosexual.

The notice of appeal was filed on behalf of Brown and the Medical Board of California by state Atty. Gen. Kamala Harris with the U.S. 9th Circuit Court of Appeals, which decided Dec. 21 to block the law that took effect Jan. 1 pending a decision on its constitutionality.

A small group of therapists and religious groups argued that the law infringes on their rights to free speech, but Harris has called conversion therapy "unsound and harmful."

Harris asked the court Wednesday to look at a recent decision by U.S. District Judge Kimberly Mueller upholding the law.

"Defendants wish to apprise the 9th Circuit of a related case currently pending before it … denying a motion for a preliminary injunction that would have enjoined enforcement of Senate Bill 1172," Harris wrote. "Both appeals involve the constitutionality of Senate Bill 1172 and raise the same and/or closely related legal issues."

One can only hope that the 9th Circuit ultimately revokes the stay and upholds the law.  Similar legislation is needed nationwide to stop what is child abuse.  Religious fanatic parents have no right to torment and psychologically and emotionally abuse their children.