Can the GOP Establishment Fix the Party's Primary Problem? 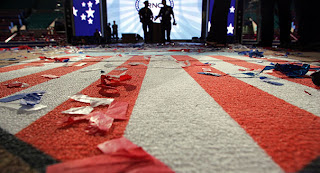 This blog has noted frequently the the GOP's descent into insanity began when the Christofascists were allowed into local city and county committees from which they slowly took over much of the GOP primary process like a slowly metastasizing cancer.   The result has been that sane and moderate candidates find themselves unable to get nominations in the typically low turn out primaries that are populated by the religious extremists - here in Virginia, The Family Foundation rallies the nutcases - and their Tea Party cousins.  The result has been that even Ronald Reagan could not win a nomination contest nowadays because he would not be extreme and crazy enough to satisfy the Christianists.  Belatedly, the so-called GOP establishment has realized that their short term expediency of embracing the lunatic fringe is turning into a form of political suicide.  An article in Politico looks at the so-called establishment's first effort to regain control of the primary system.  Here are excerpts:

The disastrous 2012 election and embarrassing fiscal cliff standoff has brought forth one principal conclusion from establishment Republicans: They have a primary problem.

The intra-party contests, or threat thereof, have become the original sin that explains many of the party’s woes in the minds of GOP leaders. It’s the primaries that push their presidential nominees far to the right (see “self-deportation” and “47 percent”); produce lackluster Senate candidates (Todd Akin has almost become a one-word shorthand); and, as seen most vividly in the last two weeks, dissuade scores of gerrymandered House members from face-saving compromise while politically emasculating their speaker.

What to do about the primaries has become Topic A in many a post-election Republican soul-searching session, and now the first steps are being taken to address the issue. For Senate Republicans, that means a modified return to their 2010 posture of openly playing in primaries. A retiring House Republican is starting a super PAC to help House members challenged from the right. And an RNC commission is mulling over changes to the party’s presidential primary.

In the Senate, where at least five GOP losses in the past two election cycles could be attributed to primaries, Republican leaders are planning to intervene in selected 2014 races to ensure preferred candidates win the nomination.

Further, top Senate Republicans have made clear to outside groups that they’d like the third parties to not exist simply as entities that air attack ads against Democrats in general elections but to play a more hands-on role in GOP primaries.  .   .   .   .  Translation into non-Senate speak: The big-money establishment Republican super PACs like American Crossroads need to serve as a counterbalance in primaries to conservative outfits such as Club for Growth and former Sen. Jim DeMint’s Senate Conservatives Fund.

In the House, look no further than the Plan B debacle and the 151 Republican “no” votes on the final compromise to understand how primaries have become the chief political threat in a GOP caucus in which more than half the members faced nominal general election opposition this year.

“A lot of the Republican Conference strategy has been to not put members in a difficult primary situation and that makes it tougher for us to sign off on a deal,” lamented former Rep. Steve LaTourette (R-Ohio), a Boehner ally.

“When a center-right Republican is in a primary and is being targeted by some group as a RINO, we’re going to make sure we have their back,” said LaTourette. “Not just with speeches and press releases but with money.”

There is more that is worth a full read.  Personally, I believe the effort will be difficult since the lunatic fringe is now far too entrenched in the local committees.  The patients have taken over the asylum and putting them back on the fringe will take a great deal of work and money - and calling out the crazies for what they are.
Posted by Michael-in-Norfolk at Friday, January 04, 2013