China’s Sexual Revolution - Refinding Its Past and Rejecting Christian Puritanism 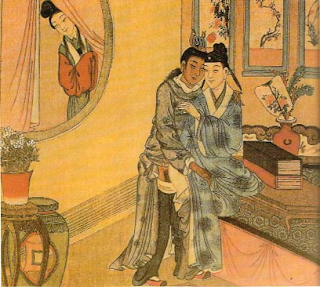 Among the many untruths constantly regurgitated by the Christofascists is the claim that marriage has throughout recorded history been one man and one woman.  The Old Testament its self shows that this claim is a lie since polygamy, not monogamy was the norm and marriage might better be described one man and numerous women at a time.  A parallel lie is that homosexuality is unnatural and that no nation has survived that ever accepted homosexuality.  This story line comes most often from upstart pastors and/or first or second generation of professional Christians ironically from a nation a mere 236 years in existence.  For comparison, ancient Rome existed for nearly three times this time span and in Russia the Romanov family alone ruled for more than 300 years.


Sadly, the truth never seems to be a high ideal with conservative Christians who rewrite history to fit their fascist like agenda (hence my use of the term Christoifascists).  In reality, outside of possibly ancient Israel which wanted to mark itself as different from all other cultures, same sex relations have been accepted universally among disparate groups ranging from the classical Greeks and Romans, the ancient Persian Empire, to Native American tribes to the Far East, including China.  Indeed, it is only where Christianity - in many ways a repackaged version of the ancient Mythras beliefs mixed with a large dose of extremism from the Old Testament's Leviticus thanks largely to St. Paul - and its Abrahamic cousin, Islam, have gone that same sex relations have come to be condemned.


Thus it is interesting that increasingly - outside of backward and ignorant areas such as equatorial Africa, where extremist versions of Christianity are flourishing with the help of American Christofascists - many older cultures are belatedly discovering that anti-gay rhetoric and Christianity based puritanism are the imported customs and mores.  A case in point is China, which is undergoing a sexual revolution.  A new book, Behind the Red Door : Sex in China, looks at this phenomen.  Here are highlights from a review in the Los Angeles Review of Books:

But the book’s greatest strength is in carving out a distinctive story for China — and showing that analogies to the Western 1960s sexual revolution are misleading. The Chinese are not so much shedding the mantle of history, Burger illustrates, as they are rediscovering their country’s past. And that past includes a sexual openness that puts the West to shame.
¤
Beginning as early as the 400s BCE, Daoist sex manuals instructed men, in minute detail, how to prolong ejaculation while bringing a woman to multiple orgasms.

That nonjudgmental attitude extended to homosexuality as well. In the Daoist view, sex between men was not so much morally wrong as pointless, as it did not facilitate the accumulation of precious qi. Sex between women, meanwhile, was implicitly condoned. Roughly half of the emperors of the Han dynasty (206 BCE–220 AD) kept young male lovers — a fact we know because imperial scribes dutifully recorded their affairs in works like Biographies of the Emperors’ Male Favorites. Such tolerance prevailed up through the Ming dynasty (1368–1644), when artists produced sex scrolls depicting intercourse between men.

It was only in the second half of the 19th century, as Western values seeped into China following the Opium Wars, that puritanism became more entrenched.  .  .  .  . Mao took this notion to a new level after 1949, stamping out prostitution and mandating an androgynous, sexless style of dress, even as he himself maintained stables of mistresses.

The irony is that by the time Deng Xiaoping initiated the economic reforms that would usher in sexual openness, licentiousness had been rebranded as Western “spiritual pollution.” The initial government line on HIV was that it had been brought to China by foreigners. Ditto homosexuality; for years, official lore held that China had no gay or lesbian people. So much for Biographies of the Emperors’ Male Favorites.

As Chinese embrace their rediscovered sexual freedom, the notion that carnality is a foreign import is an increasingly difficult sell. Beginning in 1993, the government allowed the establishment of sex stores, provided they maintained an ostensibly medical focus. Employees at Adam and Eve, the first establishment in Beijing, wore white lab coats and counseled customers on cures for erectile dysfunction. Today, China is reportedly home to 200,000 sex stores, and dried deer penis and other traditional medicines have been supplemented by lifelike sex dolls and French maid costumes.

But as an explanation of the dueling forces within Chinese society, Behind the Red Door is spot-on. Among the book’s more delicious details is the list of seven categories of sex worker devised by Chinese police in the 1990s.   .  .  .  .  And yet the list also suggests a certain innocence — a pragmatic approach to sex in a culture where it has been intermittently criminalized but not indelibly branded as immoral, a culture that will never have the same tortured relationship to contraception, or gay sex, or sexual fantasy that we do in the United States.

Posted by Michael-in-Norfolk at Sunday, December 30, 2012