The Pope and Those Who Seek to Execute Gays 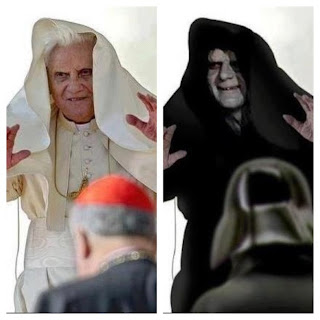 When it comes to gays, the Vatican and Pope Benedict XVI talk out of both sides of their mouths.  In one breath it is said that gays should be treated with dignity, and in the next moment homosexuality is described as "inherently disordered" and gays are said to have an "orientation towards evil.'  The latter is not exactly the stuff that will discourage anti-gay bigotry or the mistreatment of gays.  Worse yet is the Vatican's coddling and blessing of those who seek to impose the death penalty on gays such as the legislation being pushed in Uganda.  As previously noted on this blog, Pope Benedict XVI granted a private audience for Rebecca Kadaga, Speaker of the Ugandan Parliament who has been spearheading the effort to criminalize gays with the help of American Christofascists.  A column in The Guardian looks at the Vatican's hypocrisy and its efforts to control the bodies and sexual mores of others in the face of the Catholic Church's waning ability to inflict is views on individuals particularly in the face of modern knowledge.  Here are some highlights:

Earlier this month, Pope Benedict XVI joined Twitter in an effort to galvanize the faithful and modernize the Catholic Church for a younger, increasingly secular generation, making him the last person after your grandpa to join the social networking site.

The Catholic Church is foundering, and it'll take a lot more than 140 characters and a rightwing "news" hack to put it on a modern track.

The pope is a social issues guy, more interested in themes like "traditional" family values, gay marriage and abortion than, say, helping the poor. And the Vatican is quick to slap down anyone – but especially any women, and particularly women who have the nerve to think of themselves as equal to men – who focuses on helping the most in need, instead of crusading against abortion and gay people. As far as the Church is concerned, advocating for the equal participation of women is "radical feminism" worthy of condemnation; pushing for legislation that kills gay people is worthy of a blessing.

Yes, that's correct: just around the same time the pope was drafting his first tweet, he met with Ugandan parliamentary speaker Rebecca Kadaga, who had earlier promised to level the death penalty for gays as a "Christmas present" to the Ugandan people (minus, one assumes, the Ugandans who will be murdered because of their sexual orientation). She received a private audience with the pope, and a blessing.

Uganda has been a target for western evangelicals who see that they're losing the gay marriage battle in their own countries. Religious leaders and rightwing groups, including Rick Warren and the National Organization for Marriage, have gone to Uganda for years to spread anti-gay propaganda and bolster homophobia.

In the meantime, gay, lesbian and transgender Ugandans face vigilante attacks daily, and are routinely raped, beaten, ostracized, tortured and murdered.  The pope – whose own track record on men who sodomize children isn't exactly stellar – blesses one of the people whose hateful policies not only provide social cover and justification for that violence but, if enacted, would put state power behind the imprisonment and execution of gay people.

The Church's obsession with policing sexuality is nothing new: in fact, it's a centuries-old Catholic tradition for the Vatican to poke its nose in your bedroom when it feels its power is threatened. The early anti-sex crusades were focused on women – and haven't let up. Women were ordered to serve their husbands and were barred from the priesthood.

[A]s the papal states lost territory to Italy in the late 19th century, the pope came down hard on women, declaring all abortion to be murder. The Church, it seems, is a bit like a schoolyard bully, needing to pick a scapegoat to demonstrate its ultimate authority. Women have spent the past several centuries serving as that target.

The Church extended its reach into the sex lives of its followers (and of women, in particular) again in the 1930s, when it issued its ruling on contraception for the first time ever and deemed birth control incompatible with Catholic teachings on life.

Realizing it was losing followers and that most women weren't going to comply with the birth control mandate, and recognizing the social upheavals taking place through the 1960s, the Church re-evaluated its position – and doubled down.

In 1995, again facing declining congregations, Pope John Paul II re-upped the Church's hostility toward contraception, and further asserted that condoms were verboten – at the very moment HIV and Aids were ravaging nations around the world. The Church, ironically, categorizes contraception and condoms as part of the "culture of death".  By the Vatican's standards, taking a birth control pill or using a condom is far more deadly than contracting HIV, or executing an actual person for being gay.

As society has progressed, the Church has responded by digging its heels in to maintain outdated, misogynist social norms. And it has long used women's bodies as a tool through which to exercise control in the face of waning influence. Now, gay people are being subjected to the same treatment.

If the Church really wants to modernize, it could take a stand for the rights of half the world's population, and give women equal say in the Catholic hierarchy and over basic rights to their own bodies. It could promote condom use to save lives. It could take a good hard look at how its hunger for power and its authoritarianism enabled and covered for sex criminals who targeted vulnerable children.

I'm not holding my breath for any of that. But at the very least, the pope could refuse to bless leaders who want to murder gay, lesbians and transgender people for the simple crime of existing.