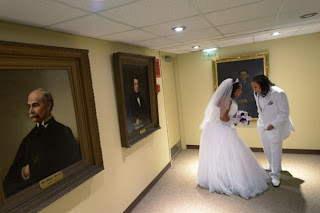 With both the District of Columbia and Maryland now allowing full gay marriage, Virginia's backwardness on social issues is being highlighted.   While Northern Virginia benefits from its close proximity to liberal Washington, D.C., much of the rest of Virginia - certainly outside of the urban areas - remains a backwater where Christofascists and rednecks rein supreme.  The irony, of course, is that these same areas suffer from the highest unemployment in the state and have difficulty attracting new business and industry.  Would that the inhabitants would take a good look in the mirror and get the massage that THEY THEMSELVES are the biggest hurdle to future prosperity.  Few progressive and forward thinking businesses want to relocate to backward, ignorant and bigoted locales - and with good reason: key employees would refuse to relocate.

An article in the Virginian Pilot looks at the arrival of same sex marriages and predictably, the majority of comments by subscribers display the knuckle dragging bigotry that helps keep Hampton Roads from attracting more progressive businesses and continues to fuel the flight of college educated young adults from the area.  Will Virginia wake up to the fact that same sex marriage is good for business?  Not so long as the General Assembly is controlled by the Virginia GOP which cowers before Christofascists at The Family Foundation. Here are highlights from the article on events across the Potomac:


Same-sex couples in Maryland were greeted with cheers and noisemakers held over from New Year's Eve parties, as gay marriage became legal in the first state south of the Mason-Dixon Line on New Year's Day

The ceremonies follow a legislative fight that pitted Gov. Martin O'Malley against leaders of his Catholic faith. Voters in the state, founded by Catholics in the 17th century, sealed the change by approving a November ballot question.

Shortly after, Archbishop Edwin O'Brien of Baltimore wrote to O'Malley that same-sex marriage went against the governor's faith.

"As advocates for the truths we are compelled to uphold, we speak with equal intensity and urgency in opposition to your promoting a goal that so deeply conflicts with your faith, not to mention the best interests of our society," wrote O'Brien, who served as archbishop of the nation's first diocese from October 2007 to August 2011.

The governor was not persuaded. He held a news conference in July 2011 to announce that he would make same-sex marriage a priority in the 2012 legislative session. He wrote back to the archbishop that "when shortcomings in our laws bring about a result that is unjust, I have a public obligation to try to change that injustice."

The measure, with exemptions for religious organizations that choose not to marry gay couples, passed the House of Delegates in February in a close vote. O'Malley signed it in March. Opponents then gathered enough signatures to put the bill to a statewide vote, and it passed with 52 percent in favor.

Kudos again for O'Malley for grasping the concept of freedom of religion and the concept of the separation of church and state.  Religion has no place in the civil laws.  Neither do the views of the morally bankrupt child rapist protectors in the Catholic Church hierarchy.