Christianists and the Non-Existence of Adam and Eve 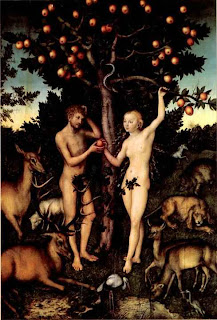 As noted before on this blog, new advances in the human genome have more or less conclusively confirmed that the Adam and Eve of the Bible did not exist as historical people.  For those not obsessed with Biblical literalism, this reality is perhaps not unavoidably fatal to their faith/religious belief construct.  But for those who foolishly continue to claim that the Bible is literally true in every respect - except, of course for those inconvenient passages such as the ones that condemn divorce, instruct the wealthy to give all they have to the poor, etc., that they ignore with abandon -  the non-existence of Adam and Eve as historical figures threatens to destroy their entire artificial faith world.  As Bob Felton at Civil Common notes, some of the extremists in the Southern Baptist Convention are in a particular dither over the collapse of the Adam and Eve myth:


Hey! What do you know? Albert Mohler and a buddy are giving a talk next April about the historicity of Adam and Eve.

Are Adam and Eve Historical Figures?
Recent challenges to the historicity of Adam in evangelical settings make it essential that we discuss the necessity of our first parent’s existence and origin according to the biblical record. Mohler and Chapell will discuss both the importance of Adam to our understanding of humanity, our world and salvation, as well as, the “field and fences” of what should be considered consistent with biblical fidelity.

The answer is … No. Adam and Eve were not historical figures.  Y’all are not going to believe I’m saying this, because it’s no secret that I loathe Mohler unreservedly, but he is right about at least this much: Adam and Eve are necessary, absolutely indispensable, to the Christian narrative.
Read Augustine, Aquinas, Calvin, Kierkegaard … Adam and Even are not a poor metaphor for the idea that we could all be nicer to each other. No. In Christian theology, that couple’s actual criminal guilt is transmitted from parent to child and at the very instant of your ‘ensoulment’ you were sentenced to eternal torture because of that guilt.

Bob is correct.  Without Adam and Eve, the entire far right Christian - and that includes reactionary Catholics like the current Pope - face seeing their entire story line collapse.  And as science and knowledge continue to progress and expand, the challenges to Christianity will only intensify.  Bishop John Shelby Spong has correctly argued that unless Christianity changes, it will ultimately die.  Those unintentionally leading the charge to kill it are the Mohlers and Benedict XVI's of the world.
Posted by Michael-in-Norfolk at Friday, January 04, 2013