Is a Fiscal Cliff Deal Emerging? 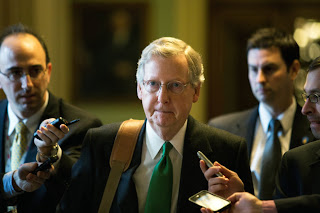 One cannot help but wonder what the rest of the world thinks of the political games being played in Congress principally by Republicans and to a lesser extent by Congressional Democrats.  The stock markets are swinging as hope of a deal grows and then diminishes.  It's not the way that the world's only true super power should be governed.  The New York Times reports that a deal may be shaping up.  I will believe it when I see it because I truly think today's GOP is insane enough to push the country into crisis.  Here are article highlights on what may be in the deal, if it is struck:

Vice President Joseph R. Biden Jr. and Senator Mitch McConnell, the Republican leader, on Monday reached agreement on a tentative deal to stave off large tax increases starting on Tuesday, but remained stuck on whether and how to stop $110 billion in across-the-board spending cuts in 2013, an official familiar with the negotiations said.

Mr. Obama used the occasion to warn Republicans that he would continue to press for more tax increases even beyond whatever may be included in a deal now. “If Republicans think I will finish the job of deficit reduction through spending cuts alone,” he said, then “they’ve got another think coming. That’s not how it’s going to work.”

Republicans responded to the president’s speech angrily, accusing him of “moving the goal posts” just when a deal was in reach. They said that they knew that the two sides still had to agree on how to suspend the automatic spending cuts, but that they generally agreed that such a suspension would be offset, at least partially, by spending cuts elsewhere. Instead, the president said any deal to turn off the so-called sequester had to be financed by tax increases and spending cuts in concert.

Under the emerging deal, income taxes would rise to 39.6 percent from 35 percent on income over $400,000 for single people and $450,000 for couples. Above those income levels, dividends and capital gains tax rates would also rise, to 20 percent from 15 percent.

The official familiar with the deal stressed that taxes would rise in some sense on the top 2 percent of earners, as Mr. Obama had wanted. That is because the deal would reinstate provisions to tax law, ended by the Bush tax cuts of 2001, that phase out personal exemptions and deductions for the affluent. Those phaseouts, under the agreement, would begin at $250,000 for single people and $300,000 for couples.

The estate tax would also rise, but considerably less than Democrats had wanted. The value of estates over $5 million would be taxed at 40 percent, up from the current 35 percent. Democrats had wanted a 45 percent rate on inheritances larger than $3.5 million.

Under the deal, the new rates on income, investment and inheritances would be permanent.  Mr. Obama and the Democrats would be granted a five-year extension of tax cuts they won in the 2009 stimulus law for middle-class and working-poor taxpayers.

All combined, the official said, the new package would raise about $600 billion over 10 years, compared to the revenue generated if current tax levels were simply extended.