Scott Lively's Crimes Against Humanity Trial to Begin on Monday 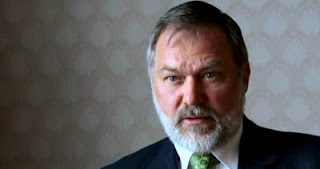 There are countless gay haters who wrap themselves in religion as they preach nothing short of open hatred towards LGBT individuals.  But few have taken their animus to the level of Scott Lively (pictured above), author of the totally debunked faux history saga entitled "The Pink Triangle" which claims gays were behind the Nazi regime in Germany.  Lively has played a huge roll in agitating for the "Kill the Gays Bill" in Uganda and has disseminated outrageous and, of course untrue,  claims against gays, including that we sodomize children.  For background, homosexuality is already illegal in Uganda, but bill supported by Lively proposes to impose the death sentence for anyone caught engaging in homosexual acts for a second time, as well as for gay sex where one partner is a minor or has HIV. It would also criminalize what it describes as "the public promotion of homosexuality"  -- including activities by LGBT rights groups -- with a sentence of up to seven years in prison for anyone convicted.


Because of Lively's role in the active persecution of LGBT individuals in Uganda which has gone far beyond statements of religious belief, the group Sexual Minorities Uganda has filed suit in federal court in Massachusetts charging Lively with violating international law by inciting the persecution of gay men and lesbians in Uganda. The Washington Post has details.  Here are excerpts:


It’s easy to laugh at wingnuts, but they have millions of followers and their hate, in the name of some perverted concept of God, gives moral cover to the queer bashers and bullies everywhere.

Lively’s unique contribution to this anti-gay agenda is his persecution consulting in other countries, most notably Uganda, where he brags he is known as the “father” of the anti-gay movements.

Many Americans have heard of the infamous “Kill the Gays” bill in Uganda, which has been introduced in several parliamentary sessions since it arose out of an anti-gay conference that Scott Lively headlined in 2009. But the day-to-day reality for LGBT Ugandans is already violence, death threats, severe discrimination and oppression. Meetings of LGBT activists are raided and shut down, and advocates have been arrested for exercising their rights to speech, assembly and association. LGBT Ugandans’ advocacy, indeed their existence, is already criminalized.

No one has done more to orchestrate this situation than Scott Lively. Since 2002, he has worked systematically to strip away human rights protections from LGBT people in Uganda and elsewhere around the world, to silence them and make it impossible for them to organize and defend their rights. While he peddles the usual, age-old lie that LGBT people are pedophiles in order to deliberately provoke the rage that feeds the growing repression and violence, he combines that myth with a new twist, that gays were also responsible for the Holocaust and that Hitler’s Germany is what can happen when a gay movement grows unchecked.

But this case isn’t simply about Lively’s “hate preach.” He long ago moved beyond “mere” hatemongering when he became a kind of persecution consultant, strategizing with influential leaders and cohorts in other countries about ways to further silence and remove LGBT people from basic protections of the law, in particular by criminalizing their advocacy. Persecution, defined as the “severe deprivation of fundamental rights” on the basis of identity, is a crime under international law; to be exact, it’s a “crime against humanity.”

This deprivation of fundamental rights of LGBT communities is exactly what Lively aims to bring about. Under U.S. law, foreign citizens who are the victims of crimes against humanity can sue American perpetrators of such crimes. And so Sexual Minorities of Uganda (SMUG) is suing Scott Lively for persecuting them. Staff from SMUG and other LGBT advocates who have suffered persecution --arrests, raids, and other severe deprivations of basic rights --will be there on Monday, when the Center for Constitutional Rights will have the honor of representing them in court.

The theology of hate, which blames LGBT people for disasters, natural and man-made, for the destruction of the family and everything in between, has to stop. And it won’t stop if LGBT advocates continue to be denied their fundamental rights to express themselves, to associate and assemble, to defend and assert their basic human rights. It won’t stop if plans like Lively’s are allowed to proceed.

Religion has often been misused as a justification for maintaining inequality and denying the humanity and dignity of others. Persecution by political forces using the Christian religion is not a new tactic, from the Inquisition to the Salem Witch Trials, but in the 21st Century we have laws against it and it’s time to hold the perpetrators accountable.

What needs to be understood is that while Lively is perhaps the most heinous of those American Christofascists who seek to strip LGBT citizens of or deny them basic civil rights, he has many allies who have supported the Uganda effort.  These include Tony Perkins at Family Research Council, the Wildmons at American Family Association and James Dobson's Focus on the Family.  While not as extreme, others who indirectly support such crimes against humanity include the Vatican and the National Organization for Marriage.  And in Virginia, these co-conspirators that welcome Lively's crimes against humanity include The Family Foundation - the puppet master of the Virginia GOP.  Should Lively be convicted, perhaps a suit against Victoria Cobb, head of The Family Foundation, should be considered since she most certainly actively advocates for the deprivation of basic civil rights for LGBT and spreads anti-gay lies and animus.


That these horrible people and organizations are allowed daily to be the public face of Christianity is an indictment of what I call the "good Christians" who act much as the "Good Germans" did during Hitler's rise to power.  They have complicity in these horrors by their inaction and silence.

Posted by Michael-in-Norfolk at Saturday, January 05, 2013