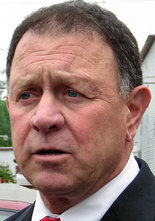 While it is possible that the U. S. Supreme Court will strike down the federal Defense of Marriage Act ("DOMA") during the coming year, there is also a push to repeal the religious discrimination based act in Congress.  To date three Republicans have signed on to repeal, the latest being Rep. Richard Hanna (R-NY) (pictured at left), who sees DOMA as contrary to the Tenth Amendment of the U. S. Constitution.  Think Progress looks at Hanna's conversion which may represent a strategy for other Republicans to buck the Christofascists who seek to keep anti-gay discrimination writ large in the nation's civil laws despite the huge generational shift taking place in respect to same sex marriage.  Here are highlights:

The Defense of Marriage Act, a 1996 law that remains one of the biggest obstacles to marriage equality today, has lost another supporter, this time a GOPer swept into Congress in the Tea Party wave of 2010.

Rep. Richard Hanna (R-NY) announced in a statement late last week that he has signed onto the Respect for Marriage Act, a bill to repeal DOMA. Since its passage in 1996, DOMA has defined marriage on a federal level as between one man and one woman, purposefully excluding gay and lesbian couples. DOMA also denies gay people who have legally wed in their states countless federal benefits and protections, such as Social Security survivor benefits if one partner dies.

[M]ost Democrats now oppose it, and are gaining momentum in bringing Republicans on board. Rep. Ileana Ros-Lehtinen (R-FL) already opposes DOMA, and now Hanna becomes the 2nd GOPer to pull his support, as he detailed in an announcement Friday:


“New York State allows all its citizens the freedom to marry the person they love,” he said. “Under the Tenth Amendment, the federal government has a Constitutional responsibility to respect New York’s right to set its own laws. It’s my job to see that it does.


“It is right to extend equal protection under federal law to all couples who are legally married without infringing upon religious freedom and beliefs,” Hanna continued. “This legislation does not tell states who can be married or who must be treated as married, nor does it require any religious institution to violate their own convictions.


“I respect the deeply held beliefs on both sides of this issue,” he said. “The simple fact remains that the federal government has a responsibility to ensure all legally married couples are treated equally under federal law – and this bill would achieve that proper standard.”

[T]he entire debate in Congress over DOMA may be academic if the Supreme Court strikes it down next year. It will hear a challenge to DOMA in the first quarter of 2013 and issue a ruling in June.