Supposedly American troops in Afghanistan and other parts of the world are fighting and risking their lives to protect American values.  Values like religious freedom, freedom of thought and opinion and freedom from state sponsored censorship.  At least that's the message trumpeted by politicians ranging from Barack Obama to far right wing nuts in the House GOP.  But apparently, the Pentagon hasn't received this message.  Or the message that honoring and supporting our men and women in uniform means not sending them out on futile fools' errands in unwindable wars like the fiasco in Afghanistan foisted on America by Chimperator George Bush and Emperor Palpatine Dick Cheney.

First, with respect to the Pentagon's disdain for claimed American values, Towleroad and Americablog are both reporting that the Pentagon is blocking blogs and webs sites labeled as "LGBT" - a label that certainly applies to this blog.  Seemingly, some folks at the Pentagon did not get the news alert that Don't Ask, Don't Tell has been repealed and that LGBT service members can come out of the closet and that they should be freely able to surf the Internet for LGBT news and outlets (some do somehow make it to this blog from Afghanistan).  It's also disturbing that far right GOP sites are not being blocked.  Here are highlights from Americablog:

It’s bad enough the United States Department of Defense censors Towleroad and AMERICAblog – banning the gay civil rights Web sites from being accessed on DOD computers – and it’s even worse that the Pentagon has no problem permitting their computers to access Ann Coulter’s and Rush Limbaugh’s hate-filled Web sites.

But what’s really offensive is that at least one of the Pentagon’s safe-surfing Internet filters has a censorship category called “LGBT.” And if you’re deemed “LGBT” by the Pentagon, they ban you.

I wonder if the Pentagon has a censorship category titled “Jewish,” “African-American,” or “Latino.”

The LGBT filter existed before the repeal of Don’t Ask, Don’t Tell, but still has not been fixed. And the Pentagon was notified of the problem as early as last summer, 2012. Yet no one’s gotten around to doing anything about it. I’m also told that the censorship varies depending on service and geographical region – it’s not entirely clear why the Pentagon doesn’t use the same bans/filters nationwide and agency-wide, if it’s going to censor the Internet at all. This problem has to be fixed Pentagon-wide.

I had a few different contacts try accessing a variety of sites on DOD computers, in order to confirm this, including Zeke Stokes, communications director for OutServe-SLDN, who confirmed via one of their military members. Note what they found. Towleroad – Banned for being “LGBT”

While the Pentagon worries about censoring LGBT sites, liberal "activist" sites and liberal political sites, it still has absolutely no problem throwing away the lives of young Americans not to mention billions of dollars which might just as well be put in a huge piled, doused with gasoline and burned.  Here's the latest sacrificial offering to American hubris and the Pentagon's betrayal of our troops: 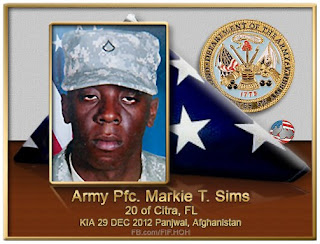 For regular readers, you guessed it.  Sims was in my son-in-law's Company and while my son-in-law is lucky enough to be recovering (he still has a long way to go even after 7 weeks), Pfc. Sims will not have that option.  Dead at 20 years old for, in my opinion, absolutely nothing.  This country and most certainly the Pentagon learned nothing from the Vietnam fiasco as we repeat the same exact disaster except in an arid climate rather than in the jungle.  Meanwhile, as always, the generals strut around like peacocks surrounded by attendants while lying to the American public and those only too happy to believe the lies in the White House and Congress.  We are not "making progress" in Afghanistan.  We are merely squandering young lives and bankrupting the country.

I could go on and on and on about filters since a good part of my job is administering the Internet filter for the school system I work for. I suspect this is more a function of a new or updated set of categories, or even a missed check mark when implementing a new filtering system or even a new set of sites and categories. I honestly think this is a news media sensationalism story. Give them a chance to work through it. Filtering companies use broad strokes, and serve many, many customers, so LGBT being blocked could only be a mistake.