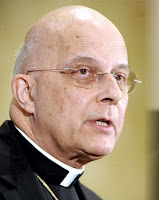 Just as the Illinois legislature is poised to consider a same sex marriage bill (more on this in the next post) Cardinal Francis George (pictured at left) of the Archdiocese of Chicago has issued a "pastoral letter" to archdiocese parishioners basically directing them to pressure legislators to vote "No" on the marriage bill.  Here's how Salon described George's action:

On Tuesday, Chicago’s Cardinal Francis George and his six auxiliary bishops sent out a letter to parishioners urging them to oppose same-sex unions, insisting that they “create a legal fiction … the state has no power to create something that nature itself tells us is impossible.”


It treats matrimony as an organic entity rather than what it truly is — a human-made state, replete with ritual and contractual obligation. And it completely ignores that the Church’s rule book, the Bible itself, has some seriously wonky notions of what constitutes marriage.

[W]hat we see of late, in the Church’s sputtering gasps of outrage about the rights of pregnant women and LGBT couples, are the vestiges of a declining order. They’re the outward expressions of old beliefs forged in ignorance and fear. They have nothing to do with “nature” and they have even less to do with anything that Jesus himself ever had to say.

Slavery itself, considered as such in its essential nature, is not at all contary to the natural and divine law, and there can be several just titles of slavery, and these are referred to by approved theologians and commentators of the sacred canons … It is not contrary to the natural and divine law for a slave to be sold, bought, exchanged or given".

Shockingly, it wasn't until 1888 that Pope Leo XIII condemned slavery and not until 1981 that the Code of Canon Law was amended to condemn the selling of people into slavery.


And then there's the issue of Cardinal George's own lack of any credibility on issues of morality.  Yes, you guessed it: George has been documented to have enabled and protected predatory priests - as has the current Pope, Benedict XVI.  Bishop Accountability quotes the following about Cardinal George from the 2002 Dallas Morning New's investigative report on cover ups by the  Catholic bishops in America:

He is facing allegations that the archdiocese had protected several priests with histories of abuse. The cardinal removed a former top aide, the Rev. R. Peter Bowman, from a parish. in late May. That was a month after a man accused the priest of molesting him many years ago - and at least a year after the archdiocese dismissed another complaint against Father Bowman because, in a church spokesman's words, it involved merely "horseplay that could have been misinterpreted." This spring, Cardinal George suspended a priest who had been a top aide to his predecessor, Cardinal Joseph Bernardin. The Rev. Robert Kealy had remained a pastor after being accused last year of abusing a teenager in the 1970s, then was removed in March after more information surfaced. He used to help Cardinal Bernardin handle abuse allegations against colleagues. Neither he nor Father Bowman has responded publicly. A third priest accused in April of abuse in the 1960s remained on the job for more than a month; the church spokesman said internal investigations have lagged because so many complaints are emerging. There are also allegations of recent abuse and archdiocesan misconduct. One lawsuit, for example, has charged that the archdiocese knew three years ago that the Rev. Walter Strus was sexually harassing parishioners but let him keep working. Father Strus has since fathered a child with a Polish immigrant, who has accused him of raping her and pressuring her to have an abortion. He has denied the allegations. "We had no indication of [the priest's] propensity for sexual assault," the church spokesman said. Another recent scandal involves the Rev. Sleeva Raju Policetti, who fled to his native India in May after being accused of abusing a girl. Church officials waited two days after learning of the allegation to call criminal authorities, who "advised us not to confront him ... until they had the chance to gather more information and question him," the spokesman said. "Somehow he found out ... anyway, and he left the country."

More recently, in 2007 Bishop Accountability compiled a list of 85 priests (that is considerably longer than the list of 55 priests that Cardinal George released) that raises serious questions as to Cardinal George's efforts to obstruct justice and protect sexual predators.


In short, Cardinal George has no moral standing whatsoever on matters of morality.  Just as the Vatican has no moral standing to be quoting "natural law" given its own continued failure to protect the weak and oppressed and/or its documented failure to accept new knowledge and modernity in general. One can only hope that archdiocese parishioners and Illinois legislators will utterly ignore George's disingenuous and morally challenged pontificating.  Indeed, they need to be asking why George has not been criminally prosecuted.