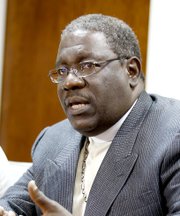 Outside of parts of Africa and Islamic countries one of the most homophobic regions of the world is the Caribbean.  And, as is the case more or less universally, the homophobia derives from the toxic evil of religion that is more focused on condemning and stigmatizing others than heeding the Gospel message of loving others and feeding the hungry, sheltering the homeless and caring for the sick.  Thus, it is a pleasant surprise to see Bahamas Christian Council president, Bishop Simeon Hall (pictured at left), make an about face and state that Christians need to treated gays with respect and as fully human.  Even sweeter is his suggestion that those who rail against gas and homosexuality may, in fact, be latent homosexuals themselves.  Tribune242  has details.  Here are highlights:

FORMER Bahamas Christian Council president Bishop Simeon Hall has lashed out against those who criticize the lifestyle choices of homosexuals.

Admitting to The Big T that as a younger pastor he too “acted in ignorance” by constantly chastising gays and lesbians, Bishop Hall said it was now evident that homosexuality was a fast growing subculture in the Bahamas.

He said every homosexual should be treated as a human being. Yesterday Bishop Hall, who serves as pastor emeritus at New Covenant Baptist Church, in a press statement said everyone stands in need of God’s grace.

“The demonisation of homosexuals by some pastors is the greatest hindrance to any positive dialogue or efforts the church might establish with them,” he said.

“The Bahamian public in general, as well as pastors in particular, must be careful of what we demonise and protest. Psychologists tell us that sometimes the things we strike out against, we do so because a bit of it lies within us on a subliminal level.

“I also believe that of the 133 sins listed in the Bible, if a pastor can only preach on one of them it could very well be that he has that problem – if not in practice then perhaps dormantly.”

Just last year, Bishop Hall took a different tone toward gays and lesbians. In response to newly released HIV/AIDS statistics in November 2011, he urged them to “seek help in turning away from their non-productive and deadly practice.”


Bishop Hall insisted that the church must consider changing its method of outreach.  If the Christian church is to reach the un-churched as our Lord commands, then, without changing our message we must change our methods and affirm our common humanity with all persons.”

Now he says that without a revamp, the church will fail in its mandate to reach all.  “If we see them and we treat them as human beings it would then be easier for us to treat the other problems that they might have. But if from the onset we treat them as sub-human, then we, the church, have already lost the battle.”

I am not sure what has prompted this changed think on the bishop's part, but one can only hope that it spreads to other religious leaders.  The Vatican could certainly stand to learn this lesson.

Wow. Amazing. But I doubt The Church will notice. And if they do, they will denounce him as a heretic or a voodoo priest.