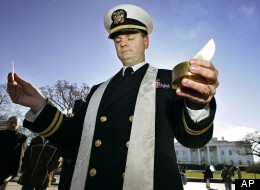 As noted in the previous post, the hate and open animus towards LGBT individuals isn't unique to Scott Lively.  There are a multitude of "godly Christian" folk who seem to do nothing but preach hatred while utterly ignoring Christ's Gospel message.  And the hatred extends beyond gays to LGBT allies or now, even to politicians like Newt Gingrich who are pragmatic enough to realize that the GOP needs to get off the anti-gay bandwagon or face extinction in the long run.  One such hatemonger is former Navy chaplain Gordon Klingenschmitt (pictured at right) who has a long history of anti-gay animus.  In the wake of Gingrich's admission that the GOP needs to accept gay marriage, Klingenschmitt has pronounced that Gingrich caved to "demonic voices" when he changed his stance on gay marriage, and that, therefore, Gingrich is "worthy of death" as are gays.  Klingenschmitt, Scott Lively and a host of other hate merchants are the face of today's conservative Christians.  It is little wonder that the under 30 generations are fleeing institutional Christianity in droves.  Here are highlights from Huffington Post on Klingenschmitt's batshitery:

Gingrich spoke about the issue of same-sex marriage during an interview with The Huffington Post in December. Although he defended his belief that marriage is between a man and a woman, the former House Speaker said the GOP needs to progress with the times.

"It is in every family. It is in every community," he told HuffPost. "The momentum is clearly now in the direction in finding some way to ... accommodate and deal with reality. And the reality is going to be that in a number of American states -- and it will be more after 2014 -- gay relationships will be legal, period."

On Thursday, Right Wing Watch posted a video response to Gingrich's same-sex marriage comments made by Navy chaplain Gordon Klingenschmitt, according to Raw Story. In the video, the chaplain says Gingrich is wholly misguided in pandering to the left and "homosexual sin."


The chaplain cites a Bible passage from Romans, Chapter 1, which says “homosexual acts are worthy of death.”

The chaplain, who belongs to an evangelical sect of the Episcopal Church and was disgraced in 2006 for disobeying an order, is not the only one to speak out against Gingrich's evolved view on same-sex marriage. Frank Schubert, National Political Director for the National Organization for Marriage (NOM), called the politician's comments both "stupid" and "ridiculous."