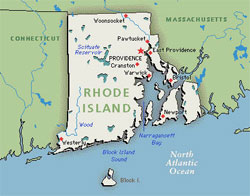 On the same day that the Illinois Senate advanced a marriage equality bill in that state, both houses of the Rhode Island legislature saw the introduction of marriage equality bills as well.  It goes without saying that the Catholic Church hierarchy, the National Organization for marriage, a likely Catholic Church front organization, and its allied hate groups will be wailing and gnashing their teeth.   The Boston Globe looks at events in Rhode Island.  Here are highlights:

Gay marriage legislation has been introduced in both chambers of Rhode Island’s General Assembly, setting the stage for another high-profile debate over the contentious issue in the only New England state that doesn’t allow gay and lesbian couples to wed.

Democratic Rep. Art Handy of Cranston introduced his bill in the House Thursday afternoon. More than 40 members of the 75-member House signed on as co-sponsors.

Moments later, Democratic Sen. Donna Nesselbush of Pawtucket introduced her version of the legislation, which has 11 sponsors in the 38-member Senate.

House Speaker Gordon Fox has called for a gay marriage vote in the House this month. The measure faces a potentially bigger challenge in the Senate, however. 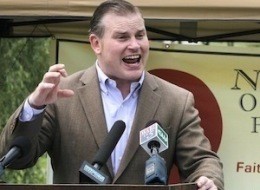 Meanwhile, in Illinois, NOM - which is still defying campaign disclosure laws and not revealing the sources of its money - is threatening any GOP legislators who vote for marriage equality in that state, justifying NOM's depiction as a Christofascist organization.  Think Progress has details:

The National Organization for Marriage has committed to another campaign of vengeance against any Republican lawmakers in Illinois that votes to support marriage equality. According to a press release today, NOM has committed $250,000 toward a state PAC dedicated to defeating pro-equality Republicans:


“Any Republican in Illinois who betrays the cause of marriage will be casting a career-ending vote and will be held accountable to their constituents,” said Brian Brown, NOM’s president. “We will spend whatever it takes — hundreds of thousands of dollars if necessary — to remove them from office, just as we did three of the four turncoat Republican state Senators in New York who were responsible for gay ‘marriage’ passing there. We will not hesitate to support pro-family Democrats to replace them, as our record in New York proves.”

As usual, NOM grossly distorts its campaign in New York. Not only did its vengeance campaign make no impact on marriage equality in the state, two of the three Republicans who were replaced lost to pro-equality Democrats, not “pro-family Democrats” as Brown implies.

It is a travesty that to date no one knows where NOM continues to derive all of its money from.  As I have noted before, you don't brazenly ignore the laws unless you have something to hide.  I continue to believe that discovering the sources of NOM's funding must be a real potential bombshell.