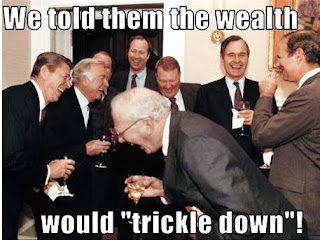 Many in the middle class have been particularly hard hit by the winds of the great recession and have seen their net worth diminished if not wiped out by the collapse of the residential real estate market.  So what is the GOP/Romney tax proposal?  Raise taxes on the middle class while the wealthy such as Romney himself get more tax breaks.  As I have noted before, I cannot fathom why the loons in the Tea Party cannot see that the GOP is out to use them and then f*ck them over.  They rail against Obama - because he's black? - even though his policies are actually in their best interests and likely will support their real oppressors in the GOP.  Yes, Romney and the GOP will deny that they are poised to screw over the middle class, but new analysis of the tax proposals says otherwise.  And did I mention what the plan does to the national deficit?  $4.5 trillion more in debt over the next decade.  So much for the GOP's concern about "job killing deficits." Here are highlights from the Washington Post:

The tax reform plan that House Republicans have advanced would sharply cut taxes for the wealthiest Americans and could leave middle-class households facing much larger tax bills, according to a new analysis set to be released Wednesday.

The report, prepared by Senate Democrats and reviewed by nonpartisan tax experts, marks the first attempt to quantify the trade-offs inherent in the GOP tax package, which would replace the current tax structure with two brackets — 25 percent and 10 percent — and cut the top rate from 35 percent.

Those changes would benefit virtually every taxpayer, but they also would reduce federal tax collections by about $4.5 trillion over the next decade, according to the nonpartisan Tax Policy Center. To avoid increasing the national debt by that amount, GOP leaders such as House Budget Committee Chairman Paul Ryan (Wis.) have pledged to get rid of all the special-interest loopholes and tax shelters that litter the code.

Republicans have declined to identify their targets. However, some of the biggest “loopholes” on the books are popular tax breaks for employer-provided health insurance, mortgage interest, state and local taxes, and retirement savings, which disproportionately benefit the upper middle class.

The net result: Married couples in that income range [$100,00 t0 $200,000] would pay an additional $2,700 annually to the Internal Revenue Service, on top of the tax increases that are scheduled to hit every American household when the George W. Bush-era cuts expire at the end of the year.  Households earning more than $1 million a year, meanwhile, could see a net tax cut of about $300,000 annually.

“According to this report, while millionaires will receive a huge tax break, earners making under $200,000 will see their taxes rise significantly,” said Sen. Robert P. Casey Jr. (D-Pa.), who chairs the Joint Economic Committee.

Roberton Williams, a senior fellow at the Tax Policy Center, reviewed the Joint Economic Committee report. Although the numbers are rough, he said, the conclusions are largely accurate.

“Even with eliminating fairly major tax preferences, the Ryan tax plan remains regressive. That’s the bottom line,” he said. “Unless you go after the tax preferences that benefit the wealthy” — capital gains, dividends, tax-free interest on municipal bonds — “it’s really hard to undo the regressivity of the rate changes. You’ll be shifting the burden of the tax code toward the middle class.”