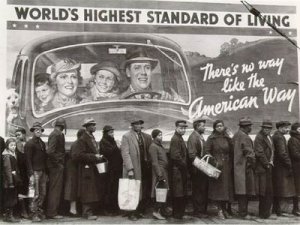 Having done all they can to destroy the U.S. economy in their quest to bar Barack Obama from re-election, the Republicans have left millions of Americans struggling to survive and keep a roof over their heads.  Not that members of the Congressional GOP care about the damage and suffering that they have caused out of their sheer political calculation that too many Americans are too stupid to see that they, not Obama are the ones to blame.  One way that millions have survived is to move in with family or friends and share homes.  Obviously, it's not the best solution but it surely beats the homelessness that individuals might otherwise face.  The Washington Post has an article that looks at the phenomenon.  Here are excerpts:

Millions of economically pressed Americans cushioned themselves against the recession by doubling up in houses and apartments, according to a Census Bureau report released Wednesday.  The number of adults sharing households with family members or other individuals jumped 11.4 percent between 2007 and 2010, the report said.
Overall, such living arrangements accounted for 22 million households in 2010 — or 18.7 percent of all U.S. households, compared with 17 percent in 2007.

Young adults were the most likely to double up, the report said, accounting for more than half of those who moved in with family members or friends. Between 2007 and 2010, the number of adult children who lived in their parents’ homes increased by 1.2 million to 15.8 million.

Those between the ages of 25 and 34 made up two-thirds of that increase, underscoring a prime reason for a broader slowdown in household formation that economists call both a symptom and a cause of the nation’s continued economic doldrums.

Economists estimate that there are more than 2 million fewer occupied homes in the country than there would have been had Americans continued forming households at the rate they did before the recession. The slowdown has lowered demand for housing as well as for furnishings and appliances, placing a further drag on the economy.

The poverty rates for shared households were lower than for other households, although the adults who made up those households individually had high rates of personal poverty, which are defined by federal guidelines.  That was especially true for young adults.

Americans were most likely to double up with other family members, the report found. In 2010, adult children accounted for 46 percent of those who doubled up, while parents who moved in with their adult children made up another 13 percent. Siblings, grandchildren and other relatives accounted for nearly 23 percent of those who doubled up, the report said.


The Republicans truly are amoral in their political calculations.  Although I guess they'd describe this result as part of their agenda to drag the USA back in time to when many families had multiple generations living in the same home.  Not by choice, but out of economic necessity.  True, the Democrats are far from perfect, but at least they don't see other citizens as disposable trash.  The GOP and its Christofascist base are truly today's Pharisees.