McDonnell Gives Ultimatum to UVA Rector and Board of Visitors 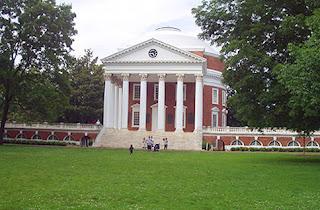 For the better part of the nine months, Virginia Governor Bob "Taliban Bob" "Governor Ultrasound" McDonnell has been more busy trying to posture himself for a vice presidential nomination on Mitt "Let them Eat Cake" Romney's ticket than he has been minding Virginia's business.  Initially, McDonnell seemed to want to avoid any involvement with the disaster created by University of Virginia ("UVA") Rector Helen Dragas and her co-conspirators/henchmen on the UVA Board of Visitors.  There was even conjecture that McDonnell would simply slip out of town to head to a Romney event in Utah while leaving the Commonwealth's flagship university in complete chaos.  Apparently, the realization finally hit McDonnell that doing nothing of substance was about to bite him in the ass big time.  Hence his ultimatum the the UVA Board of Visitors: "fix the problem by Tuesday or resign."

While the UVA disaster has its own unique characteristics, it is symptomatic of a larger problem in Virginia: state boards and other positions are typically awarded as political plums for supporters.  The bigger ones monetary contributions, the higher the profile of one's appointment.  Years ago I was appointed to the Virginia College Building Authority (which issues tax-exempt bonds for the Virginia's public colleges and universities) and I actually had bond law experience.  That's not often the case. Of course, I had really wanted a slot on the Virginia Board of Education.  But that went to a friend who gave much more money even though the individual had little background in educational issues compared to me since I had been an education activist for some years already.

But I digress.  Here are highlights from the Virginian Pilot on Taliban Bob's message to Ms. Dragas and company:

Gov. Bob McDonnell gave an ultimatum Friday to the University of Virginia Board of Visitors: Resolve the school's presidency crisis at your meeting Tuesday, or you'll be replaced the next day.

The governor delivered that message in a letter to the board, which has been embroiled in controversy since the June 10 decision to oust President Teresa Sullivan from her post after two years on the job.

The board is to meet Tuesday to consider reinstating Sullivan, whose removal sparked an outcry among students, faculty and alumni and has stained the reputation of one of Virginia's most prestigious schools.
"Let me be absolutely clear: I want final action by the Board on Tuesday," McDonnell wrote. "If you fail to do so, I will ask for the resignation of the entire Board on Wednesday."

He told board members that regardless of the outcome, he expects them "to make a clear, detailed and unified statement on the future leadership of the University."

The governor's letter followed a decision by the man tapped as interim president, Carl Zeithaml, to step aside while Sullivan's fate remains unclear.

The governor's latest message drew praise on Twitter from university political science professor Larry Sabato, who said it put the board "on notice to clean up its mess."  The only way forward is to reinstate Sullivan, wrote Sabato, who later advised fellow Wahoos not to gloat or seek reprisal after the fact, but to work to "reunify quickly & repair damage."


McDonnell's letter can be viewed at the Virginian Pilot link.