Conservative Kool-Aid on the Culture Wars 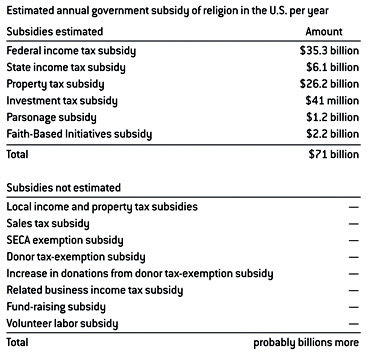 A column in the Washington Post purports to criticize the desire of liberals to attack religious institutions yet instead demonstrates the upside down world of the far right- and its ignorance and bigotry loving religious institutions - which views themselves as subject to persecution when they are not allowed to freely persecute everyone else.  The fact is that through tax policy religion in the USA receives many billions of dollars in indirect support from government every year under the pretense that churches and religious organizations are charities.  Some indeed are, but many are not as they build grandiose sanctuaries and complexes that benefit no one but their members and even as they spend countless dollars attacking other citizens and seeking to infringe on their civil rights.  It's yet one of the ridiculous special rights and deference afforded religion in this country.  And it's something that needs to end for every church and purported religious organization that isn't truly delivering charitable support to their community as their primary line of services.  And I'm sorry, but allowing mega church pastors to live the good life doesn't meet that standard.  Here's a sampling of the bullshit being peddled by Michael Gerson in the Washington Post wherein he accuses liberals and Obama of persecuting religion even as religious organizations are the main authors of the so-called culture wars:

President Obama’s decision to lead with social issues in his reelection campaign — immigration, gay marriage and contraception — makes some political sense. His ideologically divisive performance in office has left him with no serious option but a base strategy. Cultural battles inspire the liberality of liberal donors. They may pump up turnout among target groups — Latinos, college-educated whites and single women. They can goad opponents into angry overreaction. And social debates, coincidentally, are an alternative to discussing the state of the economy.

Obama’s appeal to Hispanic Americans has little downside, exploiting a vulnerability Republicans have taken great pains to create. His evolution on gay rights corresponds to a swift evolution of public sentiments. It is his assault on the liberty of religious institutions — forcing their complicity in the distribution of contraceptives and abortion-inducing drugs — that remains the most dangerous overreach of Obama’s culture war.

This issue concerns not just the outcome of an election but the nature of liberalism itself. In a free society, which should have priority: pluralism or the advance of liberal values?

A pluralist view of freedom requires tolerance for some ways of life that other citizens find oppressive or unreasonable.

This tolerance, of course, is not unlimited. It covers the Old Order Amish. It would not cover the Old Order Aztecs engaged in ritual human sacrifice. Without imposing an ideal way of life, the state can rule out the clearest abuses of human rights. But in the pluralist view, the government should grant broad latitude to institutions, even illiberal institutions, in determining and transmitting their own views and practices.

But pluralism has critics. . . . . In this view, the state has a responsibility to defend individual rights against every form of social oppression, public and private.

[A] strong civil society prepares people for participation in liberal, democratic institutions while limiting the pretensions and ambitions of those institutions. This is the genius of pluralism, and the best hope for lasting peace in the culture wars: a single nation with room for deep disagreements.

Apparently in Gerson's up is down and white is black world, the fact that his conservative - dare we say Neanderthal? - allies are persecuting other citizens and reaping special privileges to themselves to the detriment of others is perfectly fine.  I'm sorry, but institutions that receive government largess either through direct receipt of government funds or indirectly by huge indirect tax subsidies forfeit the right to pick and chose which rights are to be deprived to other citizens.
Posted by Michael-in-Norfolk at Tuesday, June 19, 2012