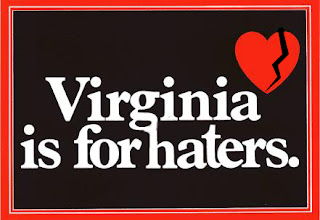 Few individuals in Virginia bear as much hatred and animus towards LGBT individuals that Del. Bob Marshall who is increasingly a huge embarrassment to not only his apparently delusional district that keeps reelecting him but to the entire Commonwealth of Virginia.  Marshall is increasingly akin to George Wallace in the 1960's on desegregation when it comes to not only to gay rights but to treating LGBT Virginians as fully human.  The man wraps himself in religious piety yet represents a one man advertisement for why would would not want to be known as a Christian.  Indeed, Marshall is an affront to common decency not to mention even a semblance of respect for the U.S. Constitution's promise of religious freedom for all citizens, not just flaming bigots and hate merchants such as Marshall.  In an editorial, the Washington Post rightly rips Marshall a new one.  Here are highlights:

WHATEVER FIG leaves Virginia Republican lawmakers grasped for, it was old-fashioned bigotry that led them to block the nomination last month of Tracy Thorne-Begland to a judgeship on Richmond General District Court. Mr. Thorne-Begland, a highly regarded prosecutor and a former fighter pilot, is also gay, and that last fact was enough for all but a handful of the 67 GOP members in the House of Delegates to oppose his nomination or to sit on their hands.

The outcome was a disgrace for Virginia, which has no openly gay judges. But to the state’s credit, its judicial, legal and political establishments aren’t solely in the hands of homophobic legislators. .  .  .  .  the Richmond Circuit Court stepped in last week and appointed him to fill a vacancy on the district court on an interim basis.   Bravo for the higher court. And hurrah for the leaders of Richmond’s five biggest law firms, who publicly endorsed Mr. Thorne-Begland’s candidacy, saying “he would be an outstanding jurist.”

Unfortunately, that’s not the end of it. The appointment ends in February, when the General Assembly will be in session. And Mr. Thorne-Begland’s opponents have already sworn to deep-six his nomination if it comes before them again. Among the most vocal is Del. Robert G. Marshall (R-Prince William), who branded Mr. Thorne-Begland “an aggressive activist” for the “pro-homosexual agenda” and said last year that gay men and lesbians are “intrinsically disordered.”

What was truly disordered was Mr. Marshall’s remark last month that Mr. Thorne-Begland would be biased if he were to preside from the bench over a case involving “a barroom fight between a homosexual and a heterosexual.” He expressed no similar concern about the possibility of bias by heterosexual judges in such cases.

The outcome of the debate over Mr. Thorne-Begland will say a lot about the commonwealth — whether it remains in thrall to bigots or is ready to face a future in which there is no place for discrimination on the basis of sexual orientation.