Will Gay Marriage Bring An End to Special Privileges for Christians ? 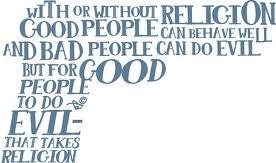 Currently the Roman Catholic Church is aging a war against civil marriage equality for same sex couples on a global basis, with particular open warfare raging in America, Australia and the the UK.    While the Catholic Church of has never enjoyed official special privileges as the established church in any of these countries, there has always been a de facto granting of of special rights and privileges to conservative forms of Christianity in all three countries.  Now, the Church of England - which has long been the established church in the UK - has joined the Catholic Church's anti-gay jihad.  In the final analysis, the battle comes down to whether or not the promise of religious freedom in all three countries will triumph over the the demand for special rights that have either been officially recognized as in the UK and by tacit approval in America and Australia.  A piece in The Telegraph  conjectures that in the UK the anti-gay agenda of the Church of England may lead to the end of the official privileges of the Church of England.  One can only hope that a similar demise may overtake the special rights too long granted to conservative Christianity in America.  Here are story highlights:

Two people meet and fall in love. They want it to be for life, so they get married. Simple, isn’t it? Theresa May, the Home Secretary, thinks so: “Put simply, it’s not right that a couple who love each other and want to formalise a commitment to each other should be denied the right to marry.”That’s why May wants to allow couples of the same sex to marry on exactly the same terms as a man and woman. The Government has asked for opinions on how this should be done, but not whether it should be done at all – which has upset those opposed to the move.


The Roman Catholic Church says the Government has no right to make such a fundamental, irreversible change, and it does not believe the Home Secretary’s promise of legal protection to ensure no priest is forced by European law to carry out a gay wedding: “As no Parliament can bind its successors, the Catholic Church and other religious bodies would be at risk indefinitely.” The Muslim Council of Great Britain has called the proposal “unhelpful and unnecessary”.
The Church of England’s official response comes close to fury: “Such a move would alter the intrinsic nature of marriage as the union of a man and a woman, as enshrined in human institutions throughout history.” Launching the response paper last week, senior figures predicted a clash between the laws of the Church and the laws of the state that is unprecedented since the Reformation nearly 500 years ago.
On the face of it, then, the ground is set for a battle between the Church and the state. But it’s not as simple as that. Despite the impression given by the official paper, the Church is divided. Many priests and lay people are sympathetic to the idea of equality.

Why is David Cameron persisting with this? There are several potential reasons: to keep the Liberal Democrats happy; to repay perceived debts; to help the Conservatives seem modern and caring; and simply because he believes in it. “Conservatives believe in the ties that bind us, that society is stronger when we make vows to each other and support each other,” he said last year. “So I don’t support gay marriage despite being a Conservative. I support gay marriage because I’m a Conservative.”
What, though, will the change actually mean? Firstly, complete equality. Civil partnerships give almost the same legal rights as marriage, but not quite.
The Church of England is unique in seeing gay marriage as a threat to its existence. It was built to care for every soul in every parish, with priests who automatically become agents of the state. They have a legal duty to marry anyone in the parish who wants it and is eligible. Now, for the first time in 500 years, there could be a difference between the Church definition of marriage and the way it is defined in English law. The Church leadership believes this will undermine its unique position, rights and privileges as the established church – deeply ironic considering it was only created so that Henry VIII could defy the Pope and remarry.

Frankly, though, it is as if those who speak for the Church can’t see what is really going on. Or else they’re playing politics, desperate to hold on to their last remaining threads of influence. If the end is nigh, it’s not because of gay marriage. That may be a snip in one of the ties that bind, but they’ve been snapping for a long time now.

Society has changed dramatically over 30 years. We no longer want to belong to anything much; we’re disenchanted with authority of all kinds; we have a remarkably improvisational approach to family life; and are open to cultural influences from all over the world.   At the same time, as congregations have shrunk and church leaders have been careless with their money, the Church of England no longer has the cash, the clergy or the people to carry out its historic mission in the same way.
The Government is very clear that it has other voices to listen to as well, as it attempts to reflect the dramatic recent changes in who we are as a people, where we come from and what we believe in.

In all three nations, the awarding of civil legal rights should not be controlled by archaic writings no matter how long revered which in the final analysis were authored by ignorant nomads who were devoid of modern knowledge.  If individual citizens want to hold on to old superstitions and what some view as mere myths, that's their prerogative.  They should not, however, be allowed to force those beliefs on others or limit the civil law rights of others.
Posted by Michael-in-Norfolk at Sunday, June 17, 2012