The Gift of Being Gay and a Dad 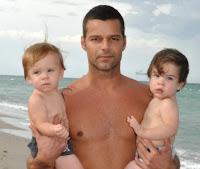 With today being Father's Day, it's difficult  not to ponder the wonder and amazing love that my children have brought me.  Of course, it's an experience that the Christofascists want to deny to same sex couples that don't include a partner who was in the closet and deep denial and married an opposite sex spouse as part of the ill-fated effort to "pray the gay away."  It's all part of the "godly Christian" agenda to make life as awful as possible for LGBT individuals and keep us stigmatized and ideally less than fully human in the eyes of society (more on that below).  But first, a post in the New York Times by a gay dad who achieved parenthood though surrogacy celebrates the joys of fatherhood.  It also reflects on the advantage that I believe gay parents have over their straight counterparts.  Here are some highlights:

When I finally accepted in my 20s that I was gay and that in order to live a life true to myself I had to come out, I knew there were “risks.” When my mother let loose a stream of consciousness list of fears that the world would visit on me for being openly gay – including never finding happiness, or being bashed coming out of a bar with my lover – the one she settled on was “…and you always wanted to be a father.”

It was the thing that broke my heart: the feeling that by coming out, I was giving up the one thing I had always wanted since I was a kid – more than any profession or any pursuit – being a dad.

I didn’t have a choice, of course. Most gay men of my generation came out when we simply could not stand the lying or daily self-denial any longer. Still, I mourned for myself and for the children I would never have.

Even as an adult, even having come to terms with my sexuality, even having decided – after much searching, and periods of being an atheist and an agnostic – that God had made me as I am, somewhere I still felt that being denied fatherhood was punishment for being gay.

Then came the revolution. Scientific advances outraced laws (and conservatives’ imaginations), and surrogacy provided a route to parenthood .  .  . our boys are the best part of our lives. They are our little miracles.

Every time I look at them I understand that far from being cursed, being a little gay boy was a blessing. It taught me compassion. It taught me how to rise above fear and self-hatred. It made me stronger.


Unlike straight couples who can find themselves unplanned parents after a thoughtless night of drinking or careless sex, gay couples have to plan and often pay high prices to become parents.  They want their children and will make sacrifices that straight counterparts often will not.  One need only read all the stories of child abuse by straight parents to see this truth.  Yet the Christianists desperately want to bar gays from being parents.  They claim that their concerns are "about the children."  Of course, the children and their welfare are the last thing on the Christianists' minds.  An article in Religion Dispatches looks at the latest snake oil being used to demonize gay parents.  Yes, the new bogus "study" on the children of gay parents.  Here are article excerpts:

Focus on the Family can hardly contain its glee over a new study that purports to show that “children raised by homosexual parents are dramatically more likely than peers raised by married heterosexual parents to suffer from a host of social problems.”

Calling this study “the gold standard” of same-sex parenting studies, FoF’s afﬁliate CitizenLink crowed that among those “social problems” were “strong tendencies, as adults, to exhibit poor impulse control; suffer from depression and thoughts of suicide; need mental health therapy; identify themselves as homosexual; choose cohabitation; be unfaithful to partners; contract sexually transmitted diseases; be sexually molested; have lower income levels; drink to get drunk; and smoke tobacco and marijuana.”


Sounds horrifying, right? And this study is the “gold standard” because, “All the other studies that have come out on how kids do in same-sex homes are all done by lesbian activist scholars,” according to Focus’ Glenn Stanton.

He’s obviously referring to the longitudinal study of same-sex parents conducted by Nanette Gartrell, M.D., who, according to her bio, “is a 2012 Williams Institute Visiting Distinguished Scholar, UCLA School of Law, and she has a guest appointment at the University of Amsterdam. She was previously on the faculty at Harvard Medical School and the University of California, San Francisco.” Oh, and she has a female spouse, Academy Award-nominated ﬁlmmaker Dee Mosbacher, M.D., Ph.D., with whom she has a 35-year long relationship.

Being a lesbian, Gartrell obviously has a vested interest in those ﬁndings, right? Maybe, but her research has been backed up by the likes of the American Psychological Association, the American Academy of Pediatrics, and the National Association of Social Workers, “who all conﬁrm that LGBT parents make good parents,”  .  .  .  .

The researcher for the new study, Mark Regnerus, isn’t free from his own bias, however. As Freedom to Marry points out in a press release on the study, Regnerus, ”is well known for his ultra-conservative ideology and the paper was funded by the Witherspoon Institute and the Bradley Foundation - two groups commonly known for their support of conservative causes. The Witherspoon Institute also has ties to the Family Research Council, the National Organization for Marriage, and ultra-conservative Catholic groups like Opus Dei.”

It’s no shock that the religious right would be touting a ﬂawed study to shore up their battle against granting even the basic of human rights to LGBT people. A Gallup poll, published in May, revealed that their argument that homosexuality is somehow “immoral” is faltering with the public. The poll showed that 54% say gay or lesbian relationships are morally acceptable. Among Catholics, that number jumps to 66%. Protestants still lag behind, but 41% say gay and lesbian relationships are moral.

Resorting to pseudo-science is the last gasp of anti-gay groups and they will certainly tout this study, ﬂaws and all, as proof that same-sex couples make awful parents and raise terribly troubled kids .  .  .  .

The case being made against gays and lesbians by the religious right has always been a spurious one, based on religious bias, bad science and outright lies. This latest study is just more of the same.


Family Research Council, the National Organization for Marriage, and Opus Dei - it doesn't get much more extreme or viciously anti-gay.  And that's who ultimately backed this "study."
Posted by Michael-in-Norfolk at Sunday, June 17, 2012