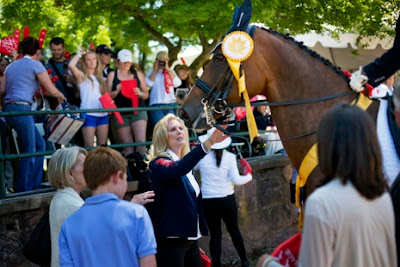 One has to wonder at times what planet Mitt and Ann Romney are from.  They surely are out of touch with most Americans.  They were raised cushioned in wealth and freedom from pesky everyday concerns that most of us struggle with daily: paying for food, rent/mortgage payments, the costs of raising children, etc.  Yet amazingly, they are making an effort to paint the Barack and Michelle Obama - each of who grew up in the school of hard knocks - as "elitists.  What makes the whole affair all the more ludicrous is Ann Romney and her horse.  And, despite Kathleen Parker's effort to pretend otherwise and/or that liberals are "attacking success", it's not just any horse and we are not talking about "success" as most Americans understand the term.   We are taking about a sport at a level reserved to the extremely wealth.  And we are talking about a horse that allowed the Romneys to take business expense deductions to the tune of   some $77,000.00.  That's right, more than many American families make in a year's time.  Here are highlights from The New Yorker on Ms. Romney's horse and hired rider - which by the way made the Olympic team:

This year, in London, will there be a red-state Olympics and a blue one? Ann Romney’s horse Rafalca is going, to compete as a team alongside her trainer, Jan Ebeling, whom she pays to win. They qualified this past weekend; at the event that clinched the spot, Ann Romney held up one of the foam fingers that the dressage federation had ordered to show that it could take a joke that Stephen Colbert had made about the sport’s élitism. Ann cheered; Rafalca and Ebeling came in third. On this basis, she has been called, in some reports, an Olympian. Let’s grant her that.

Ann Romney’s involvement in the Olympics, though, raises some questions beyond the obvious ones suggested by a sport that is pursued at its upper levels, or played, primarily by the wealthy and their retainers.  .  .  .   Do we have to cheer for Ann? Does Romney get to accuse Obama of a lack of patriotism if we don’t?

Dressage, too, is a tricky sport politically, in part because many people have trouble seeing the sporting part at all. What they see is the money; it is as though each of the prancing horses were pacing out the shape of a dollar sign.  .   .  .  .   It is not clear that the Romney campaign grasps that.

The Romneys reported a business loss for the care of Rafalca that added up to some seventy-seven thousand dollars. This may be entirely within the rules, but it’s a reminder of how the tax code is full of pleasant surprises if one is rich, which remain invisible if one is not.


With the stage thus set, let's look at an article in Politicususa.com  that examines the disingenuous - may we say farcical? - effort to claim that it is the Obama family, and not the Romneys who are the elitists:

Ann Romney, wife of Republican presidential presumptive nominee W. Mitt Romney, told Detroit’s WJR Frank Beckmann that she “doubted” she and Mitt would take as many overseas trips as the Obamas, because their happiness “comes from being with our children and our grandchildren.”

Mrs. Romney probably shouldn’t be making digs about vacations, with her husband having taken off 212 days of his last year as governor.

Thus it was Beckmann who first threw out the completely inaccurate hot potato that the Obamas take a lot of “overseas trips”. One wonders if he was referring to the President’s job, but no, Ann assumed he meant as vacations, and that choice infers her tacit agreement with the faulty premise.

How many things are wrong with this? Well, number one, President Obama hasn’t taken any overseas vacations. He does travel overseas for work. You know, as President and all. And yes, even though Cokie Roberts thought Hawaii was exotic, it is still in the United States and not considered “abroad”, and it’s where the President’s family resides.

Number two; the trips Michelle has taken have been with her kids, sorta like “happiness” coming from being with “children.”

And number three, W. Mitt Romney was basically on vacation the entire last two years of his term of Governor of Massachusetts. He pulled a Palin, only he never announced it.

Salon noted, “He spent 212 of them out of the state, racking up more than 200,000 miles in the air and traveling to nearly 40 other states to lay the groundwork for his 2008 White House campaign. He kept the title of governor, sure, but ask just about anyone in the Bay State and they’ll tell you: He walked out on the job. He quit — just like Palin.”

Ouch, but the comparisons to Palin don’t end there, “His polls numbers were dropping (by October ’06, his favorable rating was barely above 30 percent), with voters expressing regret at having elected him in the first place.”

While the GOP wants to depict Ann Romney as a hard working stay at home mom, she's more like Marie Antoinette than most working mothers in America.  One can only hope that this "elitist" ploy bites the Romneys firmly in the ass.

Oh, and I'm not anti-horse riding etc.  I grew up with horses and riding when my family lived in upstate New York.  And I have a sister-in-law from a social register family (I believe one of her relatives of some sort even used to own The New Yorker), so I've been to dressage events which are full of pomp and circumstances.  I even recall one event where a young boy in the competition was riding a horse that had cost more than my car.  It's a great sport, but not a sport for the working class.
Posted by Michael-in-Norfolk at Saturday, June 23, 2012