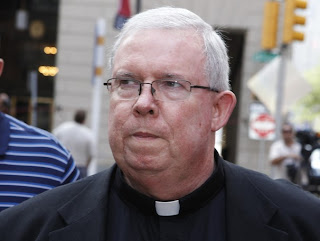 While he was acquitted on some of the criminal charges, Monsignor William Lynn of the Philadelphia Archdiocese was convicted yesterday of of child endangerment.  The conviction makes Lynn the first U.S. Roman Catholic church official to be convicted of a felon for covering up abuse claims as part of the worldwide criminal conspiracy orchestrated from the Vatican.  The trial made it very clear that one individual who should have been indicted for criminal conspiracy was former Cardinal Anthony Bevilacqua who conveniently died in his sleep before the trial got underway.  The pattern revealed in the Philadelphia archdiocese is all to familiar: the deliberate cover up for sexual predator priests who were then reassigned to unsuspecting parishes where they could find fresh prey.  Nowhere in the equation did the safety of children and youths ever factor in.  It underscores the utter moral bankruptcy of the Catholic hierarchy all the way up the chain to the current Pope and his predecessors.  Here are highlights from the New York Times coverage:

PHILADELPHIA — A Roman Catholic church official was convicted of child endangerment but acquitted of conspiracy Friday in a landmark clergy-abuse trial, making him the first U.S. church official branded a felon for covering up abuse claims.

Monsignor William Lynn helped the archdiocese keep predators in ministry, and the public in the dark, by telling parishes their priests were being removed for health reasons and then sending the men to unsuspecting churches, prosecutors said.

Lynn, 61, served as secretary for clergy from 1992 to 2004, mostly under Cardinal Anthony Bevilacqua.  “Many in the Roman Catholic Archdiocese of Philadelphia hierarchy had dirty hands,” Philadelphia District Attorney Seth Williams said. “They failed to realize that the church is its people.”

He was convicted of only a single endangerment count, which carries a possible 3 1/2- to seven-year prison term.

Despite Lynn’s acquittal on the conspiracy charge, the trial exposed how deeply involved the late cardinal was in dealing with accused priests.

Bevilacqua had the final say on what to do with priests accused of abuse, transferred many of them to new parishes and dressed down anyone who complained, according to testimony. He also ordered the shredding of a 1994 list that Lynn prepared, warning that the archdiocese had three diagnosed pedophiles, a dozen confirmed predators and another 20 possible abusers in its midst.

Lynn didn’t react when the verdict was read  .  .  .   The judge revoked his bail and he was taken to jail, although his lawyers plan to ask on Monday that he be granted house arrest until sentencing. No date was set, but the judge scheduled an Aug. 13 pre-sentencing hearing.

To me it is most telling that while the Vatican and other high level clerics have continued to refuse to clean their own putrid house, they launched a jihad against gays and gay marriage and fabricated the myth that "religious liberty" is threatened by the Obama administration.  Anything, apparently, to distract the sheep in the pews from the reality that they are supporting a criminal enterprise through their contributions to the collection basket.
Posted by Michael-in-Norfolk at Saturday, June 23, 2012