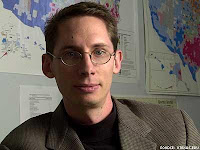 I used to have respect for the University of Texas which often represents an island of sanity in the otherwise insane world known as Texas.  But the deeply flawed "study" questioning the abilities of gay and lesbian couples as parents authored by UT professor Mark Regnerus (pictured at left) suggests that even that august university is succumbing to the wingnut fanaticism of the Christofascists.  Despite universal condemnation and criticism - other than from anti-gay hate groups and the professional Christian set, of course - Regnerus issued a statement that he stands by his "study" which says nothing in fact about parenting by committed same sex parents.  The real irony is that the Christofascists will combine this study with their promotion of the "ex-gay" myth so as to guaranty that there will be more doomed marriages where LGBT individuals marry a straight spouse, have children, and then divorce thereby causing more fractured families.  The "godly Christians" always claim their first concern is "about the children" but it's not.  It's all about promoting anti-gay hatred and discrimination.  Here are highlights from the Advocate on Regnerus' statement:

Professor Mark Regnerus sought to examine whether there is a difference between growing up with a gay parent as opposed to other forms of family structures. Several have blasted his research, including the American Psychological Association, which has even submitted briefs for court cases, citing that "lesbian and gay parents are as likely as heterosexual parents to provide supportive and healthy environments for their children."

Additionally, a joint press release by the Human Rights Campaign, Freedom to Marry, Family Equality Council, and the Gay and Lesbian Alliance Against Defamation said Regnerus is a right-wing author, and that his study was biased in part because it was funded with $695,000 from the antigay Witherspoon Institute and $90,000 from the Bradley Foundation. Activist organization Truth Wins Out has launched a campaign calling for the University to investigate the study.

However, Regnerus told The Daily Texan that he stands by his research, which appears in the July issue of Social Science Research.  .  .  .  .   The study was criticized for not examining the lives of adult children of stable lesbian parents. Many of the study's children considered to be raised in gay households were not being raised by parents in a committed same-sex relationship, whereas many of the children in heterosexual households had two married parents. Children of parents who had at one time in their lives been in a same-sex relationship were considered to be part of a "gay household."