Mitt Romney Believes Children Are Better Off With Straight Parents 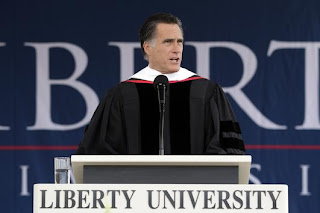 While Michael Gerson would have his readers believe that it is Barack Obama who is fueling the "culture wars" the real truth is that it's Mitt Romney who is guilty of fanning the flames of the such wars.  A case in point: Romney's video appearance at the theocrat sponsored Faith and Freedom Coalition where Romney attacked gay parenting and stated that children do best with straight parents.  Never mind the endless child abuse cases one sees literally all around the country involving straight, not gay, parents.  This inconvenient reality never makes it on the radar screen of the gay-hating Christofascists or their political whores such as Romney.  Politiker looks at this latest example of Romney's anti-gay agenda:

Mitt Romney made a speech via satellite at the Faith and Freedom Coalition Saturday morning in which he reiterated his view that children are better off growing up with heterosexual parents.

“We need to strengthen the commitment that exists in this country to family. I hope to be able to talk to young people and tell them how important it is to get married before they have children because the opportunity for a mom and a dad to help guide the life of a child gives them such an enormous advantage in their lives going forward,” Mr. Romney said.

The Politicker reached out to the Romney campaign to see whether they felt a child could equally benefit from the guidance provided by a gay couple. Ryan Williams, a spokesman for Mr. Romney, said it is the candidate’s long held belief children are better off with straight parents.

Though Mr. Romney believes states should be allowed to give gay couples the right to adopt children, he has said in multiple interviews that he believes a heterosexual marriage is the “ideal setting” for children to grow up in. He opposes granting either marriages or civil unions to gay couples.

Somehow in Romney's world engaging in heterosexual sex trumps all else when it comes to parenting.  I suppose he also believes that mankind co-existed with dinosaurs as well.  The more I know about the man, the more I dislike him.
Posted by Michael-in-Norfolk at Tuesday, June 19, 2012