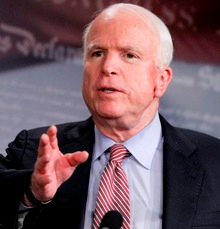 It's always fun to watch the conservative get into a cat fight and taking shots at each other.  A case in point is the current spat between John McCain and Mitt Romney and his campaign.  While in my view McCain will never fully recover his credibility after selecting the insane and despicable Sarah Palin as his VP running mate, from time to time he does still manage to hit the nail on the head.  Like when he accuses foreign money of  creeping into Mitt Romney's super PAC and when he vehemently states that corporations are not persons.  Think Progress looks at this latest contra tempts.  Here are excerpts:

Though he has been one of Mitt Romney’s most visible supporters, Sen. John McCain (R-AZ) took aim yesterday at both Romney’s Super PAC and one Romney’s most controversial talking points. In an interview on PBS’s NewsHour, McCain told Judy Woodruff that because casino billionaire Sheldon Adelson makes a huge portion of his profits from a casino in Macau, his massive spending in support of Mitt Romney and other right-wing candidates is a form of foreign money influencing American elections:


WOODRUFF: This question of campaign money, highlighted today by the announcement that there’s a huge amount of money coming in from one donor in the state of Nevada.


MCCAIN: Mmmm hmmm. Mr. Adeleson, who gave large amounts of money to the Gingrich campaign and much of Mr. Adeleson’s casino profits, that go to him, come from this casino in Macau.


WOODRUFF: Which says what?


MCCAIN: This which says that obviously, maybe in a round-about way, foreign money is coming into an American campaign, political campaigns.


WOODRUFF: Because of the profits that the casinos in Macau…


MCCAIN: Yes, that is a great deal of money. And, again, we need a level playing field and we need to go back to the realization that Teddy Roosevelt had that we have to have a limit on the flow of money and that corporations are not people. That’s why we have different laws that govern corporations than govern individual citizens. And so to say that corporations are people, again, flies in the face of all the traditional Supreme Court decisions that we have made — that have been made in the past.

Romney, of course, said in August that “corporations are people, my friend,” a claim that he and his campaign surrogates have vigorously defended since.

Though it is illegal for non-citizens to spend any money to influence U.S. selections directly, the Supreme Court’s 5-4 Citizens United ruling left the door wide open for the American employees of American subsidiaries of foreign owned corporations — and even sovereign wealth funds — to spend millions or billions from their corporate treasuries on “independent” expenditures.