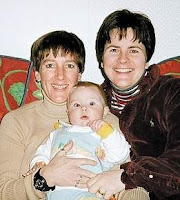 There are new developments in the federal kidnapping case of Lisa Miller (pictured at far left in the photo) - the self-proclaimed "former" Lesbian, if you believe the truth and veracity challenged folks at Liberty Counsel - who fled the USA with her daughter in defiance of Vermont Court orders awarding custody to Miller's former partner, Janet Jenkins. A Virginia man from Stuarts Draft, a small town not too far from Liberty Counsel's home base in Lynchburg, Virginia, has been arrested for his involvement in helping Miller flee the USA with her young daughter, Isabella. As noted before in prior posts, some administrative support staff at Liberty Counsel outwardly appear to have perhaps been involved in assisting Miller as well. The Rutland Herald has coverage on these new developments. Here are some highlights:

A Virginia man who federal prosecutors say helped a woman leave the country with her daughter so she wouldn’t have to turn custody of the girl over to her former lesbian partner surrendered Tuesday to face charges he aided in international parental kidnapping.

A complaint unsealed Tuesday said Kenneth L. Miller, 46, of Stuarts Draft, Va., arranged passage for Lisa Miller to travel to Canada before flying with her daughter in September 2009 to Nicaragua, where she was sheltered for a time by a group of Mennonite missionaries.

Kenneth Miller appeared in U.S. District Court in Burlington on Tuesday and was released, said U.S. Attorney Tristram Coffin, who would provide no further information about the case.

None of the Millers involved in the case is related.

The affidavit made public Tuesday indicated that Timothy Miller had helped provide the information that led to the charges against Kenneth Miller.

The affidavit says Timothy Miller arranged passage for Lisa Miller and her daughter, paying for the tickets with his mother-in-law’s credit card, but Kenneth Miller had told him he would be reimbursed for the price of the tickets.

In the spring of 2010, Lisa Miller was indicted in Vermont on charges of international parental kidnapping.

The latest complaint alleges that Kenneth Miller, a Mennonite pastor, asked another Mennonite pastor from Ontario, whose name was redacted from the affidavit, to meet Lisa Miller and her daughter Isabella, now 11, at a hotel in Niagara, Ontario. In Ontario, that pastor picked Lisa Miller and her daughter up at the hotel and took them to the airport in Toronto, where they flew to Mexico and then Central America.

If convicted of aiding in international parental kidnapping, Kenneth Miller could be sentenced to three years in prison.

Of course what many of us would like to see ultimately surface is involvement by Matt Staver or others on the legal staff of Liberty Counsel. The organization, which files lawsuits on behalf of right wing Christianist groups, in my opinion, needs to be shut down.
Posted by Michael-in-Norfolk at Wednesday, December 07, 2011