Meanwhile, The Christianists Are Livid with Obama and Clinton

As noted in the prior post this morning, the forces of hate and evil who parade around hiding under the cloak of religion are beside themselves with President Obama for issuing his memorandum to U.S. agencies that will conflict with Christianist efforts to export homophobia abroad. Among those leading the way is the registered hate group Family Research Council - which as best I can tell does very little in terms of advancing the Gospel message of feeding the hungry, caring for the sick and aiding the homeless but spends millions on disseminating hate. These "godly Christians" are apoplectic that their anti-gay agenda is being challenged. Joe Jervis at Joe. My. God has details on FRC hysterical denunciation of Obama: 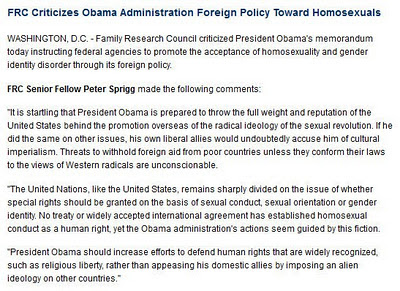 It is noteworthy that FRC henchman, Peter Sprigg, is among those who ardently support the "choice myth" about sexual orientation. His credentials that qualify him for this? None - as is the norm with the Christianist faux experts. Per FRC's own website, his background is as follows: "Mr. Sprigg is an ordained Baptist minister. Before coming to FRC, he served as pastor of Clifton Park Center Baptist Church in Clifton Park, N.Y. Mr. Sprigg previously served for ten years as a professional actor and unit leader in Covenant Players, an international Christian drama ministry." His only academic degree is in political science/economics. Nothing in the area of medicine or mental health credentials. As for one of the many reasons why FRC is a registered hate group, Joe notes as follows:

Remember last year when the Family Research Council paid lobbyists $25,000 to convince Congress NOT to denounce the gay death penalty in Uganda? How fucking DARE the president interfere with their plan to see you dead!

Posted by Michael-in-Norfolk at Wednesday, December 07, 2011