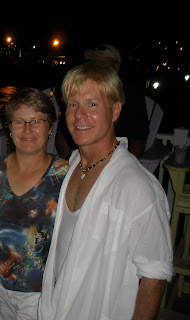 As much as I complain about living in Virginia which is a legal backwater in terms of how LGBT citizens are treated, the boyfriend (pictured at left) and I do have a busy and full social life. Indeed, at times it's almost too busy. As a result, we both are often "over booked" and this weekend was an extreme example. Hence why I have not posted since yesterday morning - we've been over extended in terms of networking and social commitments.
Yesterday began with me speaking to a group of 35 to 40 real estate investors on topics such as using self-directed IRA's for real estate investing. Next I visited my 96 year old aunt who broke her leg and under going therapy in a rehab center. Then I raced home to help the boyfriend prepare for his salon's holiday party at our home. After that, we headed to an ACCESS AIDS Care fundraising party hosted by friends in Norfolk. Following that, we went to The Wave to dance for a little while where, as is the norm, I saw clients. As an added ego enhancing experience, I had an adorable Navy boy dance with me in a "come hither" way while I was dancing alone on the main dance floor (the boyfriend was talking to some other friends). As we get older I must concede, dim lighting and alcohol are truly wonderful at times! :)

Today, the frantic pace continued as we finished preparations for the salon staff function which included all staff and their significant others. The menu was amazing and would have done Paula Dean proud - and yes, the boyfriend has done her hair twice - and the brunch and karaoke DJ were a great success. No sooner had we finished cleaning up than we had to go to the birthday party of a friend who looks after one of the boyfriend's 90+ year old clients. It was a lot of fun and included a truly crazy cross section of attendees, all of whom are gay friendly.

I mention all of this for two reasons. First, for those still in the early stages of coming out who have seen their former social life collapse, my experience proves that you can move on and rebuild a new social life. Second, even in backward places like Virginia, one can have a great social life and in the process of being out and proud have the opportunity to change hearts and minds merely by being yourself and making no apologies for who the creator made you to be.
Posted by Michael-in-Norfolk at Sunday, December 04, 2011

Email ThisBlogThis!Share to TwitterShare to FacebookShare to Pinterest
Labels: ACCESS AIDS Care, fundraiser, living out and proud, the boyfriend, The Wave