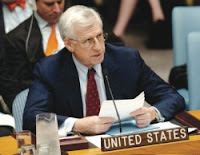 In many ways former GOP Senator John Danforth (pictured at right) represents what the Republican Party once was - a party where reason, logic and facts mattered and where intelligence was respected. It's the Republican Party that I and most of my extended family once embraced. Fast forward to today and what blogger friend Pam Spaulding refers to as the "GOP clown car" and the difference in what the GOP is is today as opposed to a decade or two ago is mind numbing. Unlike too many formerly in the GOP, Danforth isn't afraid to call things as he sees them. His term for the slate of GOP presidential candidates? Embarrassing. That's right, embarrassing. And Danforth is 100% on the money. The decline in the GOP tracks ultimately two things: the party leadership's embrace of the theocracy loving Christian Right and the Tea Party. Am embrace that put short term expediency over long term prospects. A piece in Think Progress looks at Danforth's lament for what has become of the Republican Party. Here are some highlights:

Republican John Danforth, who served as a senator from Missouri for nearly 20 years and later as George W. Bush’s ambassador the United Nations, is not happy with the slate of Republican presidential candidates. “I’ve been watching some of these Republican debates and they’re just terrible. Terrible,” he told KTRS in St. Louis yesterday. “It’s embarrassing for me as a Republican to watch this stuff,” he added, calling out audiences for applauding the candidates’ morbid boastings. Via Fired Up Missouri:


DANFORTH: What have been the big applause lines in these debates? Well, a statement that the governor of Texas is responsible for killing 234 people on death row. Or that we favor torture. Or that we’re creating a fence on the Mexican border that electrocutes people when they try to cross it. Or when people show up at the emergency room at hospitals and they’re not insured don’t treat them. And that, I mean these are the big applause lines, people just hoop and holler when they hear all that. [...]

It doesn’t have anything to do with the republican party that I was a part of. This is just totally different. And all of these people who are saying this, y’know, and claiming that, y’know, they’re for all this stuff, they also sort of ostentatiously say, “Oh, we’re very religious people. We really, we’re just very pious, Christian people.” They were for torture, and electrocution of the people on along the border and all of that. That doesn’t have anything to do with, is contrary to the Christianity that I understand.

Since leaving public office, Danforth has often publicly criticized the Republican party, of which he remains an active and influential member, for drifting father and farther to the right.

It's nice to see that others recognize the cancerous like metastasizing of the Republican Party that has occurred since the party sold out to the self-righteous and self-congratulatory folks in the Christian Right. As I have said before, to remain a Republican, one needs to either be a total racist, theocratic, or have had a lobotomy.
Posted by Michael-in-Norfolk at Sunday, December 04, 2011

Danforth is the senator who pushed hardest to confirm Clarence Thomas and to demonize Anita Hill. The knaves of today are his legitimate descendants IMHO.

And perhaps we should pause to remember that the smarter first Bush president inflicted Thomas on the nation in the seat once occupied by Thurgood Marshall.