Quote of the Day - Bob Felton on Religious Fundamentalism 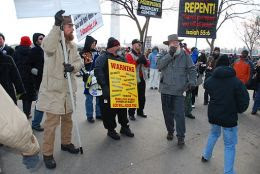 The saying goes that religion and politics are subjects to be avoided if one wants to avoid controversy. But sometimes idiocy and bigotry wrapped in the cloak of "religious belief" need to be called out so as to stop - or at least slow down - the harm that is done in the name of "religion." Fundamentalism of all creeds remains one of the most destructive and dangerous forces for evil in the world today whether it be Islamic or Christian fundamentalism. Bob Felton sums up the need well in a post at Civil Commotion where he looks at a fundamentalist Kentucky church's hasty about face on its recent vote to bar interracial couples from church membership. Here's the money quote:

Like most of us, I was taught as a child that one should always be polite and deferential regarding the religious beliefs of others, and so I was until I moved to Wake Forest, home of the SBC’s Southeastern Baptist Theological Seminary. Here, I learned how destructive and harmful unreasoning belief actually is, and today I endorse this passage from H.L. Mencken’s coverage of the Scopes Trial:

The way to deal with superstition is not to be polite to it, but to tackle it with all arms, and so rout it, cripple it, and make it forever infamous and ridiculous. Is it, perchance, cherished by persons who should know better? Then their folly should be brought out into the light of day, and exhibited there in all its hideousness until they flee from it, hiding their heads in shame.

The Christianists in this country continue to believe that they have a license to lie about others and endeavor to trample on the religious freedom of others. The rest of us need to redouble our efforts to speak the ugly truth about them and end their pernicious influence in modern society.
Posted by Michael-in-Norfolk at Tuesday, December 06, 2011