The False Myth of Voter Fraud 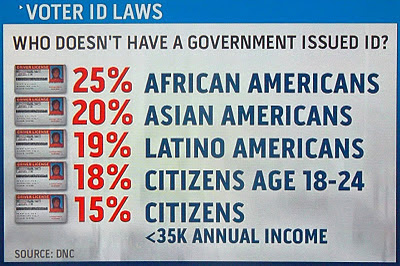 In a number of states - particularly states where Republicans hold a majority - there has been a movement to pass legislation that makes it a requirement to vote that would be voters have government issued photo ID with them when they go to the polls. The ostensible reason put forth by the GOP proponents for the requirement is to stop "voter fraud." In truth, as the chart above from the DNC explains, the real reason for the requirement is to depress the minority vote since most minorities with good reason do not vote Republican. To a lesser extent, the requirement is also aimed at suppressing the youth vote because as with minorities the younger voters do not vote for the Christianist dominated GOP.

Can you imagine what these disingenuous bastards will do when some day the tables are turned and they and the Christianist/Tea Party base of the GOP are in the minority? These fools and bigots are truly setting a bad precedent that hopefully will come home to bight them in the ass big time preferably sooner as opposed to later.
Posted by Michael-in-Norfolk at Monday, December 05, 2011

If any of the clowns would offer ANY evidence that voter fraud was an issue, I MIGHT be able to get on board, but OMG, they just don't get it, do they?
Peace <3
Jay