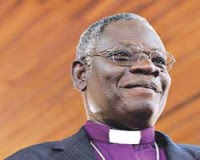 It's been a good while since I have mentioned Archbishop Peter Akinola, former Anglican primate of Nigeria and a strong supporter of break away Episcopal parishes in the USA. Akinola is violently anti-gay and is suspected by many to have ordered the massacre of 660 Muslims Yelwa, Nigeria, by the Christian Association of Nigeria (Akinola was president of the organization at the time of the massacre). A lengthy piece in The Atlantic in 2008 looked at the massacre and other atrocities in Nigeria about which Akinola's only comment was "My views on Islam are well known: I have nothing more to say." Here's a highlight from the article on the "Christian" militia's behavior:

During the Christian attack, the two young women took shelter in an elder’s guarded home. On the second day, the Christian militia arrived at the house. They were covered in red and blue paint and were wearing those numbered white name tags. The Christians first killed the guards, then chose among the women. With others, the two young women were marched toward the Christian village. “They were killing children on the road,” Danladi said. Outside the elementary school, her abductor grabbed hold of two Muslim boys she knew, 9 and 10 years old. Along with other men, he took a machete to them until they were in pieces, then wrapped the pieces in a rubber tire and set it on fire.

When Danladi and Ibrahim reached their captors’ village, they were forced to drink alcohol and to eat pork and dog meat. Although she was obviously pregnant, Danladi’s abductor repeatedly raped her during the next four days.

Akinola's views on gays are also well known and as the Lagos Guardian reports, Akinola is strongly behind the currently pending anti-gay legislation in Nigeria. Other supporters of the bill which would impose lengthy prison sentences include Felix Jovi Ehwarieme, Adjunct Professor of Scientific Theology and Biblical History at the United Bible University, Lagos and President of Shepherd Organization, which runs "ex-gay" therapies. Akinola and Ehwarieme embody the religious extremist behind the legislation. It goes without saying that American Christianists have had their hand involved in stirring up anti-gay hysteria in Nigeria as well. Here are some highlights from the Guardian article of the foul forces supporting this legislation:

Since its passage by the Senate, Nigeria has received strong criticisms and warnings from the British, Canadian and the United States of America governments, which have individually threatened to withdraw aids and other forms of assistance to Nigeria, if the law is allowed to exist.

But Akinola, in an exclusive interview with The Guardian, urged President Jonathan not to succumb to such pressure, but rather tow the path of God by assenting to the bill.

Akinola, who described the bill as “a new orientation towards transformation and reformation of Nigeria from its moral decadence into a new platform of sound morality,” said President Jonathan would be going against God’s will for Nigeria if he refused to sign the controversial bill into law.

He stated that Nigeria needs such law to preserve the nation’s sacred moral heritage for national development. The former Primate of Church of Nigeria, who described homosexuality as an aberration, said it was repugnant to the word of God and African beliefs. “Same-sex marriage is against natural order of creation; it is against the laws of our religions, and it is against our African custom and traditions,” he said.

Felix Jovi Ehwarieme, who has worked with a lot of homosexuals to overcome the condition, said homosexuality is a learnt habit devoid of genetic manipulations.

“An average male child has masturbated at one stage of his life or the other. If this behaviour were not controlled, it would lead to lack of interest in the opposite sex. This often happens in the subconscious mind, so that by the time one grows into it, one would not know why one hates the opposite sex. This is because when one masturbates, one may have practiced it with other male children,” he argued. “So, by the time they are qualified to have sexual relations, they just discover that they have something that satisfies them more than natural sex.” “The problem with homosexuals is that they do not know how they become what they are,” he surmised.

Yep, as always, the Catholic Church is spreading anti-gay hatred as well. This ignorant, hate- filled rhetoric (which is sweeping much of Africa) is part of what prompted Barack Obama and Hillary Clinton to take action earlier this week. People don't come much nastier than Akinola in my opinion and it is far past time that hate and extremism based on supposed religious belief be reined in and ended. A glimpse of what's happening in Nigeria makes a strong case that the world would be a far better place if religion simply vanished from the face of the earth.
Posted by Michael-in-Norfolk at Saturday, December 10, 2011

That repugnantly immoral person is on the devil's path. Hell awaits him. He's nothing but a criminal.